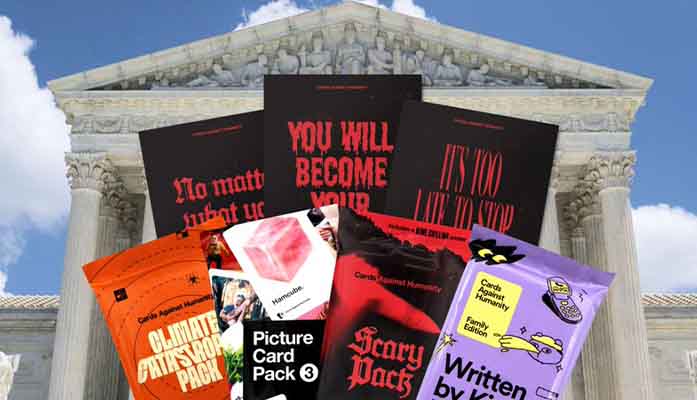 Cards Against Humanity (CAH), the popular entertainment company, is forcing Arizonan customers’ hands on the abortion debate. If Arizonans buy from the company online, 100 percent of the proceeds go to the two abortion fund providers within the National Network of Abortion Funds (NNAF); if the Arizonan discloses that they’re pro-life, the company slaps them with a $5 surcharge.

The entertainment company informs Arizonan buyers online that Arizona is one of 22 “theocratic hellscapes” that have abortion restrictions or bans. The company claimed on their checkout page that Arizona abortion law would imprison “pregnant people.”

“100 percent of profits from orders to forced-birth Republican hellholes will be donated to the National Network of Abortion Funds,” reads a disclaimer at the top of the website.

In addition to all proceeds, CAH donated $100,000 to NNAF. As AZ Free News reported, the two NNAF abortion fund providers in Arizona are the Abortion Fund of Arizona (AFAZ) and the Tucson Abortion Support Collective (TASC). The latter abortion fund provider is also receiving funds from the acclaimed playwright and actor Lin-Manuel Miranda of “Hamilton” fame.

In late July, the company partnered with Dynata to conduct a survey of 2,920 people’s abortion knowledge and awareness in the 22 “dystopian forced-birth hellscape” states with abortion restrictions and bans. 169 respondents (5 percent) were from Arizona.

“If you’re unfortunate enough to live in one of these forced-birth hellholes, 100 percent of profits from your order on the CAH store will be donated to the NNAF to help the people most f****d over by Republicans in your state government,” wrote the company. “And for the love of God, don’t forget to vote this fall. Okay, time for some casual sex.”

The company has been involved extensively in politics since its founding about a decade ago, but it appears that Donald Trump’s campaign and election triggered the company’s activism against Republicans.

In August 2016, CAH released limited edition “Vote for Hillary Pack” and “Vote for Trump Pack,” with each pack containing 15 jokes about the featured candidate. Proceeds for sales of both card editions went to Clinton’s campaign.

After Trump won, the company sold survivalist bags that came with gas masks, a can of beans, and a locket containing Trump’s predecessor, Barack Obama.

In February 2017, one of the company’s founders, Max Temkin, sent a Hitler-themed board game to all 100 U.S. senators. In the game, one team plays a liberal group working to defeat the other team playing a secretive fascist group attempting to put a “cold-blooded” leader in power. In a since-deleted tweet, Temkin shared a copy of the letter accompanying the board game gift.

“We thought you and your staff might find our game relevant as you negotiate the balance of power with the Trump White House,” read the letter. “To achieve his evil ends, Adolf Hitler required the cooperation of well-meaning men who hoped to appease and control the Nazis. Our game explores that relationship and highlights the difficulty of recognizing your own manipulation before it’s too late.”

In April 2017, the company mailed over 2,000 potatoes to Senator Ron Johnson (R-WI) for refusing to hold a town hall on health care. Johnson donated the potatoes to a local church’s network of food banks.

In December 2017, CAH bought a plot of vacant land on the southern border and retained a law firm specializing in eminent domain to thwart Trump’s attempt to complete the border wall. It was part of a greater campaign, Cards Against Humanity Saves America, where CAH collected $15 from 150,000 people.