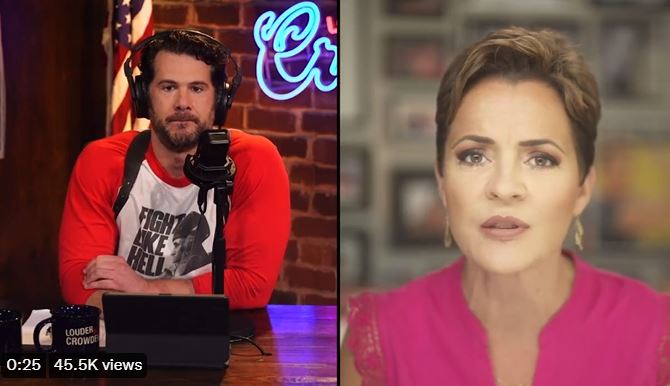 On Wednesday, YouTube suspended the “Louder With Crowder” show for their interview with Republican gubernatorial candidate Kari Lake last week.

YouTube explained in a notice that the show contained content that propagated “false claims that widespread fraud, errors, or glitches” changed the 2020 election results leading to Joe Biden’s presidency.

While on the show, Lake shared her doubts about the legitimacy of the 2020 presidential election results. She said that she believed the election was stolen.

The show is hosted by popular conservative pundit and comedian Steven Crowder. The offending video is available on Rumble and BlazeTV, while the audio version is available on Crowder’s website, Spotify, Apple Podcasts, Amazon Music, Audible, and Deezer.

Lake denounced YouTube’s action as an effort of Big Tech censorship ahead of a critical election. She applauded Rumble for exhibiting free speech friendliness.

Rumble warned social media users that censorship was only about to get worse ahead of the midterm elections.

The Republican Party of Arizona added to the claims, asserting that the YouTube suspension was a Big Tech collusion to stifle party opposition.

Wednesday’s suspension was far from Crowder’s first over the years. Last year alone, the show was suspended in March, April, October, and December. The platform removed Crowder from its YouTube Partner program as well last year, removing his ability to run ads. He has over 5.7 million followers on YouTube, and nearly 2 million followers on Twitter.

Over the years, Crowder and YouTube have traded jabs. The frequency of YouTube’s suspensions moved Crowder to divide his live daily shows into two segments: one that is “YouTube friendly,” and another, longer half for his “Mug Club” subscribers over at BlazeTV.

Crowder ends his “YouTube friendly” shows with a direct jab at the platform: “Piss off, YouTube,” followed by a cartoon of his brand’s mug urinating on YouTube’s logo.

Last week, Crowder earned criticisms from Big Tech and the mainstream media for his response to the FBI raid of former President Donald Trump’s home at Mar-a-Lago.