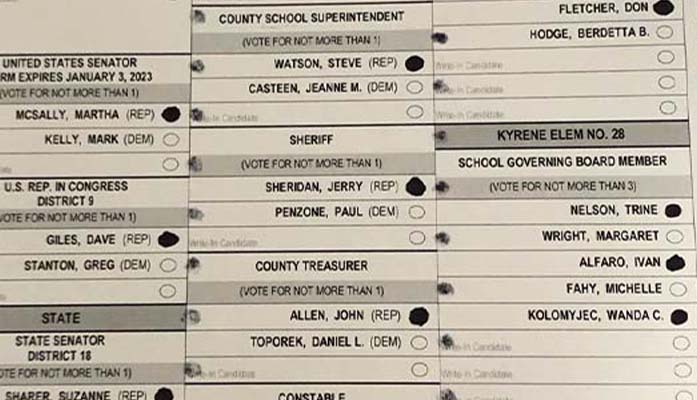 “If you’re voting on Election Day, we need that pen to dry quickly because you’re going to feed it directly into the tabulation machine that is there at the voting location,” Richer said.

The county’s switch comes months ahead of the two-year anniversary of “SharpieGate,” a viral belief that grew out of local voter complaints in the 2020 election that Sharpies used at voting locations to fill out ballots caused tabulation machines to struggle processing their ballots.

In May, Richer shared with KTAR News that SharpieGate-related concerns among voters were another reason they ceased using Sharpies.

“It’s small but emblematic of what we’re trying to do here,” said Richer.

Yet in June, Maricopa County Board of Supervisors Vice Chairman Clint Hickman said in a since-deleted interview with AZ Family that Sharpies were the manufacturer-recommended tool because of their quick drying time.

“Sharpies are recommended by the manufacturer because they provide the fastest-drying ink. The offset columns on ballots ensure that any bleed-through will not impact your vote,” said Hickman.

In the weeks following 2020 voters’ concerns that Sharpie ink invalidated ballots, Maricopa County asserted that Sharpies didn’t compromise ballot integrity and were “the best option” for their tabulation equipment. They also claimed that Sharpies were the “fastest drying ink” that “doesn’t smudge.”

The county added that the tabulation machine manufacturers recommended the use of Sharpies over other writing instruments.

Richer pleaded with voters to use the felt-tipped pens, saying that other pens — like ballpoint — might cause residue buildup in the tabulating machines.

The changes prompted some within GOP leadership to openly balk county protocols. Arizona Republican Party Chairwoman Kelli Ward instructed her voters to use their own pens when voting.

State Representative and secretary of state candidate Shawnna Bolick (R-Phoenix) announced that she would be using her own pen to vote in person.

Bolick later shared that poll workers were giving her reports of the pens bleeding through the ballots. The county has assured voters repeatedly over the past two years that bleed-through doesn’t affect the machines’ ability to read ballots.

In response, Richer said that naysayers of the new pens were attempting to disrupt the primary. He advised voters to comply with their election workers by using whatever pen they’re given.

“It’s a primary. What the heck do you think we get out of giving people a special pen other than a smooth functioning election?” asked Richer. “Do you think we’re just asking you to use the Pentel pen to be funny? Good lord people.”