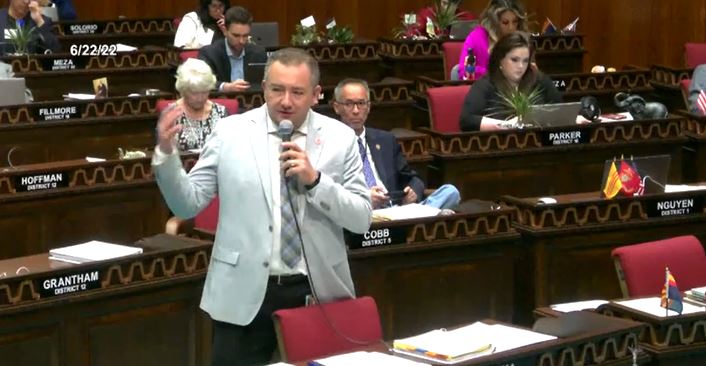 The Arizona House approved a universal expansion of the state’s school choice program on Wednesday afternoon. It now heads to the Senate for review.

The legislation, HB2853 by State Representative Ben Toma (R-Peoria), prompted protracted arguments that delayed the vote for about an hour. House Republicans managed to overcome Tuesday’s budget disputes to rally the majority to pass the bill, 31-26 along party lines. Anti-school choice activists in the gallery shouted “Shame!” repeatedly as the vote totals were read, adding to their general disruption and commentary presented throughout the hour-long debate on HB2853.

Democrats asserted that public schools weren’t fully funded, insinuating that was why they fell short in the eyes of Republicans and what they claimed was a minority of Arizona parents. They insisted that universal school choice through the state’s Empowerment Scholarship Account (ESA) Program contradicted the will of a majority of Arizona voters.

Republicans argued that school choice should be the option for all students, regardless of income or zip code. They repeated the idea that parents were the ultimate accountability for student success and outcomes, not government.

As the final vote and argument presented, Toma argued that Democrats’ logic meant that voters couldn’t ever possibly change their mind on the subject of school choice, which he insisted wasn’t true. Toma insisted that dollars should follow the students and not be the ownership of individual systems.

Toma wondered why private schools should be the exclusive domain of the wealthy, citing back to committee testimony from Drew Anderson — a South Phoenix pastor, Democrat, and beneficiary of school choice, which lifted him out of the squalor of public schools and onto a path resulting in his becoming an NFL player and consequently enabling him to lift his entire family out of poverty.

“This is giving everyone the opportunity to make full use of all their choices,” said Toma.

AZ Free News summarized the highlights of the partisan floor arguments for and against HB2853.

State Representative Kelli Butler (D-Paradise Valley) characterized the bill repeatedly as “disrespecting the will of voters,” which earned reprimanding from Speaker Pro Tempore Travis Grantham (R-Gilbert). Butler doubted that beneficiaries of the ESA Program were using their funds to “learn anything,” claiming that there wasn’t proper oversight of beneficiary schools’ curriculum.

“They could be learning the most basic things and using our tax dollars,” said Butler.

Sierra also predicted there would be regulations on this bill, speculating that a group of liberals would launch a school built around the 1619 Project, and that the legislature would then attempt to regulate private schools if that happened.

State Representative Judy Schwiebert (D-Phoenix) said that a vast majority of families choose a public district for their children because of their accountability and presence of school boards, calling public school curriculum “well-rounded, publicly vetted, [and] diverse.”

Ultimately, Schwiebert insisted that not all children deserved school choice.

“Technically I know we’re giving it to parents, but let’s be real about it, we’re funneling it to private schools,” said Schwiebert.

State Representative Sarah Liguori complained that the ESA Program was corrupted because some of her wealthier “mom friends” used program funds toward their children’s education. Ligouri said that those individuals should pay for private schooling themselves.

State Representative Melody Hernandez (D-Tempe) said that expanding the ESA Program would actually trap low-income families in failing schools, many of whom she said were minorities. She called the bill “immoral,” and claimed that Republicans were targeting people like her by expanding a system of oppression.

State Representative Lupe Diaz (R-Hereford) insisted that Democrats’ arguments about the harm of school choice couldn’t be true based on the longevity and successes of school choice in Arizona’s history.

“If this program causes so much heartache and blows up public schools, then it wouldn’t have the longevity it has now,” asserted Diaz.

State Representative Shawnna Bolick (R-Phoenix) said she would’ve loved to have school choice options like this growing up, and asserted that it was a good thing that children could use ESA dollars for college education as well.

“Why should we wait until higher education to allow taxpayers to utilize these public dollars for their [children’s] education?” said Bolick.

“The fact of the matter is, the schools have failed us. Parents are taking their kids out because they see this failure,” said Fillmore.

State Representative Joanne Osborne (R-Goodyear) said that every generation of her family dating back to the late 1890s graduated from Arizona’s public school systems, and that her daughter is a current public school teacher, but that those factors didn’t outweigh her care for children’s needs.

Osborne characterized HB2853 as a win for all Arizona schoolchildren, and asserted that a majority of Arizona parents want school choice. Her remark prompted commentary from the gallery.