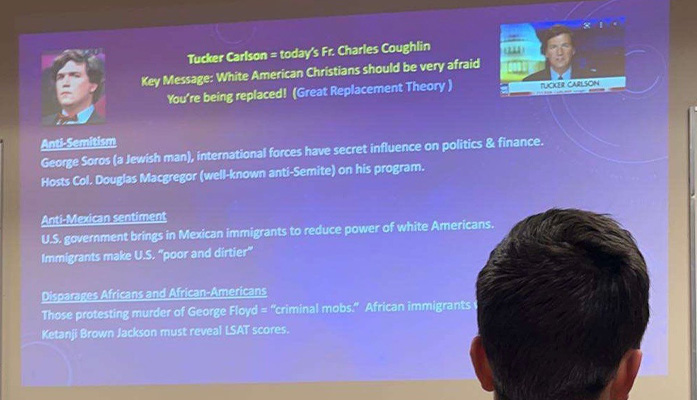 Coughlin pioneered political radio, garnering around 30 million listeners in his program’s heyday. He denounced the Ku Klux Klan (KKK) though he expressed opposition to banks and Jewish people in power. He opposed communism but was equally against free market capitalism, going so far as to support Franklin Delano Roosevelt’s (FDR) New Deal initially. Coughlin advanced the term “social justice.”

For years, the mainstream media discussed how Democrats were relying on and influencing demographic changes to skew voting in their favor, quipping “demographics are destiny.” The 2020 election results cast doubts on Democrats’ long-term plan as more of a theory, when voter turnout reflected that Republicans were the party of multiracial, working-class voters in practice. However, polling suggested that younger Hispanic and black individuals were more likely to vote Democrat.

The slide then listed evidence to support its claims of Carlson’s racism toward Jewish, Mexican, and black people. It listed various claims put forth by Carlson. On charges of antisemitism, the slide summarized Carlson’s statements that George Soros, a Jewish man, and international forces secretly influence politics and finances.

Carlson’s full remarks focused on peoples’ concerns over the quality of areas where large numbers of immigrants settled and how elected leaders ignored those concerns. He also characterized immigrants as “nice people” and highlighted concerns from Tijuana, Mexico citizens over the spikes in crime and uncleanliness accompanying Honduran immigrants— something mainstream media and the classroom slideshow neglected to spotlight.

“[Immigrants are] nice people, no one doubts that, but as an economic matter this is insane. It’s indefensible, so no one even tries to defend it. Instead our leaders demand that you shut up and accept this. We have a moral obligation to admit the world’s poor, they tell us, even if it makes our country poorer and dirtier and more divided,” stated Carlson. “Immigration is a form of atonement. Previous leaders of our country committed sins; we must pay for those sins by welcoming an endless chain of migrant caravans. That’s the argument they make.”

Finally, on charges of anti-African American sentiments, the slide pointed out how Carlson called George Floyd protestors “criminal mobs,” and how he insisted on the necessity of seeing Supreme Court Judge Ketanji Brown Jackson’s LSAT scores. The slide neglected to include the fact that Carlson was referring to those engaged in rioting when accusing George Floyd protestors of criminal mob behavior.

“Reason and process and precedent mean nothing to them. They use violence to get what they want immediately,” wrote Carlson. “On television, hour by hour, we watch these people — criminal mobs — destroy what the rest of us have built.”

“[An LSAT score] would settle the question, conclusively, whether she’s a once-in-a-generation legal talent,” stated Carlson. “It would seem like Americans in a democracy have a right to know that and much more before giving her a lifetime appointment.”