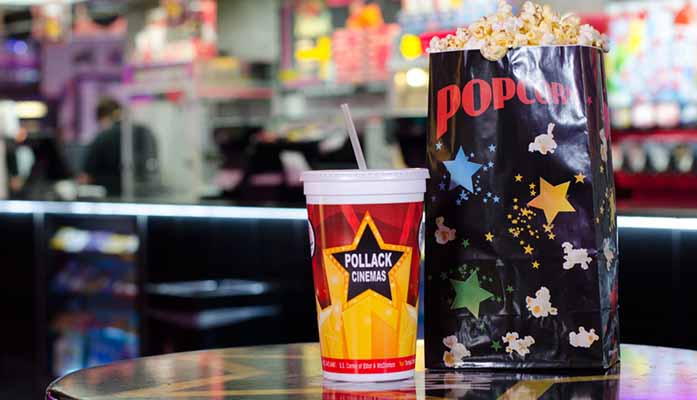 Many Arizona small businesses were forced to shutter under Gov. Doug Ducey’s various pandemic executive orders, never to reopen. But after Michael Pollack learned his six-screen Pollack Cinemas in Tempe had to close in March 2020, he decided to use the time to renovate the business, which finally had its long anticipated reopening last week.

Pollack has achieved great success as a commercial and industrial real estate investor in Arizona, California, and Nevada. But he told AZ Free News that owning Pollack Cinemas “is more of a labor of love.”

Before Arizonans heard of COVID-19, the projectors at Pollack Cinemas had been running seven days and nights a week for several years. But indoor movie theaters and other “non-essential” businesses were suddenly closed down for several months. What could have been a curse became an opportunity, says Pollack, who was on hand Dec. 10 when the projectors were turned back on and movie-goers ponied up $3.50 for a ticket, the same price as the last decade

Yet despite the modernization, Pollack insists the discount theater’s motto remains the same – that quality is never compromised for price.

“Our mission has always been to provide our customers with a unique experience that starts at the front door.,” Pollack said. “At the heart of our theater is our vision to bring families together for a movie at a price everyone can afford.”

During the closure, Pollack and his wife Cheryl oversaw renovations that involved every aspect of their business located at McClintock Drive and Elliot Road. Many of the changes, such as touchless fixtures throughout the restrooms and 1,300 all new seats with an easier-to-sanitize leatherlike covering, were influenced by COVID-19.

“We’re trying to do everything we can to be as safe as possible,” Pollack said.

There are also new ceilings throughout the six theaters as well as new flooring and new contemporary lighting. But other upgrades, including an upgraded sound system, a redesigned concession stand, and 16 holograms located throughout the lobby, were about providing a high quality experience for audiences.

“The truth is it was a complete makeover,” Pollack says, one that would not have had as good of an outcome without the efforts of several Arizona contractors, including Shamrock Electric and Merestone Event Production. “Everything has been extremely well received.”

According to the Independent Cinema Alliance, its segment of the movie industry was responsible for $3 billion in annual sales pre-pandemic. That represented nearly 20 percent of the North American box office.

For now, Pollack Cinemas will show movies Friday through Sunday, with the family-friendly “Elf” returning for its annual holiday run. The other days are set aside for the six theaters to be rented out for meetings and special events, including one theater which seats nearly 290 people and can be easily transformed to host small concerts.

Pollack isn’t expecting to have sell-out audiences anytime soon. He understands it will take time to get movie-goers back into the habit of going out again.

“There are loyal movie-goers out there,” Pollack says, adding that he hopes to draw in new guests, particularly those only used to watching movies on little screens. “Pollack Cinemas has always offered a very cool, unique experience. No matter how big your home screen is, it’s not the same experience as you get at a movie theater. I look forward to sharing it with as many people as we can.”

On Dec. 17, there will be a special early screening of the biopic “American Underdog” about former Arizona Cardinal quarterback Kurt Warner. It will be joined by several other movies, including Guillermo del Toro’s highly anticipated suspense / thriller “Nightmare Alley” with its all-star of Bradley Cooper, Cate Blanchett, Rooney Mara, David Strathairn, Willem Dafoe, Toni Collette, Ron Perlman, and Mary Steenburgen.

Pollack says he expects to offer online ticket purchasing later this month as well as reserved seating. More information about Pollack Cinemas and showtimes are available at  https://www.pollacktempecinemas.com