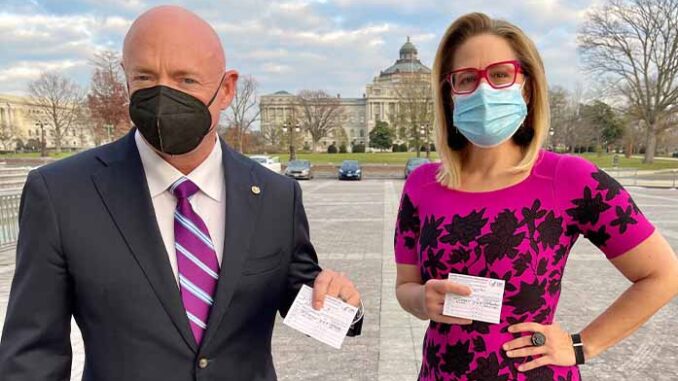 Democratic Senators Mark Kelly and Kyrsten Sinema voted against a resolution to nullify President Joe Biden’s mandate that businesses with 100 or more employees get vaccinated for COVID-19 or implement weekly testing.

The only Democrats to vote for the resolution were Senators Joe Manchin (D-WV) and Jon Tester (D-MT). The resolution was sponsored by Senator Mike Braun (R-IN). As AZ Free News reported, it was based on the Congressional Review Act (CRA), which establishes that the House and Senate together may overturn a federal regulation without presidential approval.

The two senators didn’t address their vote against stopping Biden’s vaccine mandate, one that aligned with a majority of their party. A day after that vote, Sinema said that she encouraged all Arizonans to get vaccinated quickly in a post announcing COVID-19 vaccinations through the Phoenix Veterans Affairs (VA).

“We strongly encourage all veterans — and all eligible Arizonans — to get vaccinated as soon as possible,” wrote Sinema.

At the end of October, Kelly asserted that the goal was to “beat” COVID-19 through higher vaccination rates.

“Our mission is to beat this virus. The science and data are clear. Vaccines save lives,” wrote Kelly. “Higher vaccination rates = Mission Success.”

Around that same time, Sinema posted a similar affirmation of the necessity to vaccinate most, if not all, Arizonans.

“Glad to see the continued progress toward returning to normal. We’re encouraging all eligible Arizonans to get the vaccine for our continued health and economic recovery,” wrote Sinema.

Sinema followed up with an urge to vaccinate as many American youths as possible.

“The sooner young Arizonans get vaccinated, the sooner our schools can fully return to safe and effective in-person learning. We strongly encourage all Arizona families to get vaccinated as soon as vaccines are available,” wrote Sinema.

Big COVID-19 Pharma hasn’t spent much on Kelly directly, but they have invested in Sinema.

Pfizer spent over $1 million on Democratic congressional candidates and nearly $860,200 on Republican congressional candidates in the 2020 election. They didn’t donate to Kelly’s campaign directly, but they did donate $10,000 to an affiliated PAC, “BOLD,” which donated $3,000 to Kelly. In fact, Pfizer donated $7,500 to Kelly’s Republican opponent Martha McSally. Pfizer did donate $2,500 to Sinema and $5,000 to her PAC, “Getting Stuff Done.”

Johnson & Johnson had similar donation patterns: they didn’t donate to Kelly, but they did donate $4,500 to Sinema. They also donated $10,000 to BOLD.

Moderna stated as recently as June that they don’t plan on endorsing a political action committee (PAC), and that they wouldn’t engage in partisan donorship for candidates.