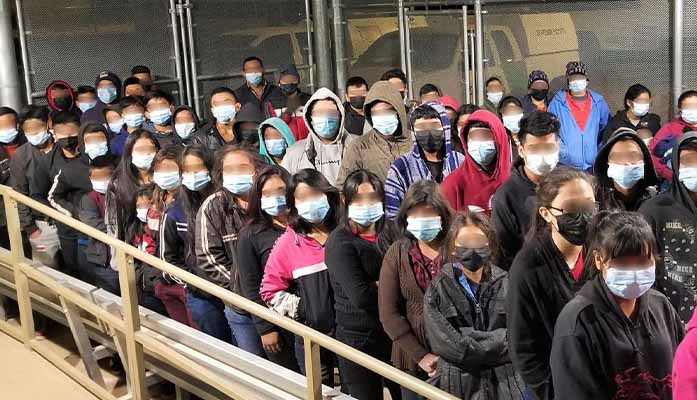 While President Joe Biden continues to ignore pleas from Arizona’s sheriffs to take back control of the southern border, one top federal law enforcement official in Arizona is revealing the true nature of the border crisis, one social media posting at a time.

John R. Modlin is the Chief Patrol Agent of the U.S. Border Patrol’s Tucson Sector and its 3,600 employees assigned to cover Cochise, Pima, and Santa Cruz counties. His frequent use of Twitter features significant arrests and apprehensions by his agents, while also highlighting efforts by local USBP to keep local residents and the country safe.

On Tuesday, Modlin announced that agents with the USBP Brian A. Terry Station in Cochise County arrested Jesus Tafolla-Beana near Naco. Records show Tafolla-Beana, a Mexican citizen, was previously convicted in Utah of felony unlawful sexual activity with a minor and then deported. As a result, Tafolla-Beana was unlawfully in the United States when taken into custody.

Cochise County Sheriff Mark Dannels told AZ Free News that USBP’s arrest of Tafolia Beana illustrates the continued dangers of an unsecure border. It is a concern Dannels and other border sheriffs have spoken about since Biden took office, particularly after he nominated Alejandro Mayorkas to be Secretary of the U.S. Department of Homeland Security.

“A secure border promotes safe communities and their quality of life,” Dannels said. “Border security shall never be discretionary, but a mandate by all elected officials, local, state and federal.”

Unfortunately, local and state law enforcement leaders have had little success getting the Biden Administration to engage in constructive discussions about the border or to even admit there is criminal activity occurring at the border. Modlin’s social media efforts are seen as a realistic, albeit small, glimpse of what is really happening.

“Beana is just another example of the aggravated criminals breaching our southern border,” Dannels said. “I applaud our Border Patrol agents for all they do in protecting our borders during a time where historical intrusions are challenging their efforts.”

Modlin’s disclosure about Tafolla-Beana’s arrest came about 24 hours after he shared a photograph of 166 undocumented migrants apprehended in a remote area west of Sasabe by agents with the USBP Three Points Station.  More than 70 minors were in the group, Modlin noted.

Earlier this month, journalist Terence Jeffrey reported in The Daily Signal that from February to October of this year, 23 undocumented migrants with prior homicide convictions have been taken into custody in Arizona. The 23 have since been charged in U.S. District Court with the federal crime of illegally reentering the United States after deportation.

The uncontrolled border situation recently prompted the Western States Sheriffs’ Association to issue a statement of No Confidence in Mayorkas’ leadership.

The group, which represents sheriffs in 17 states, called on the President to take immediate steps to remove Mayorkas. The statement also noted there already has been more than one million illegal border crossings this year, with “hundreds of thousands of illegal immigrants” who local authorities know were not intercepted by federal law enforcement at the border.

“After witnessing this disaster over the past several months and listening to the continued rhetoric and intellectual dishonesty from Secretary Mayorkas, the Western States Sheriffs’ Association and its membership must emphatically state our position of having NO confidence in the ability of Secretary Mayorkas, and his leadership within the Department of Homeland Security, to affect any positive outcome on this matter,” the statement reads.