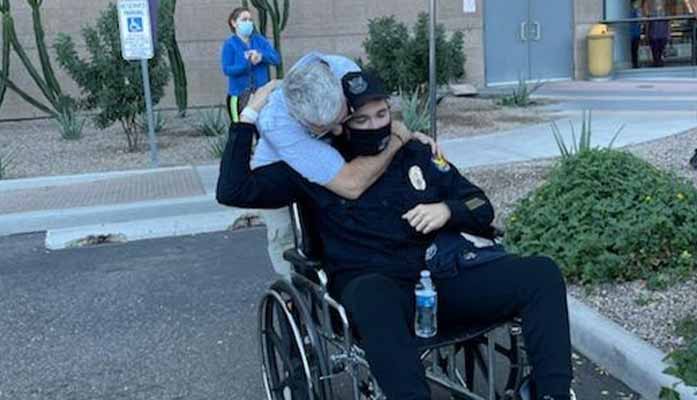 The Phoenix Police Department (PHXPD) granted one of their own officer’s sons, Zach Hunzinger, an honorary appointment to fulfill his lifelong dream of joining the department like his father as he continues his battle with osteosarcoma – bone cancer. Officer Hunzinger was appointed by PHXPD outside of Phoenix Children’s Hospital on Tuesday. His father pinned his badge to make it official, and later posted a heartfelt message to his son.

“Growing up, Zach Hunzinger always wanted to follow his dad’s footsteps to become a Phoenix Police Officer. In April of 2018, Zach was diagnosed with bone cancer in his leg, which has recently spread to his lungs. Welcome to the Phoenix Police Department, Zach. We will always be here for you! #NoOneFightsAlone #ForeverStrong #PHXPD,” wrote PHXPD.

The newly-established Officer Hunzinger attended Liberty High School (LHS), where he was the captain of his football team and began training his final semesters to join his father at PHXPD. Then his first cancer diagnosis came in 2018. Hunzinger went on to complete several rounds of chemotherapy and surgeries, having part of his femur removed and a steel rod inserted.

Hunzinger returned to LHS in March of 2019 to finish his senior year and resume training. Upon graduating, he continued training to test for the PHXPD. His plans were stalled again around November after his cancer returned.

It wasn’t until recently that this second bout of cancer spread to Hunzinger’s lungs.

Those interested in supporting Officer Hunzinger’s fight can donate to his GoFundMe here.