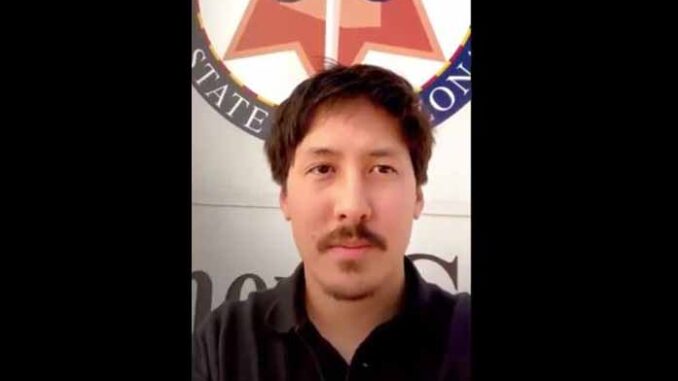 Ron Watkins – a prominent proponent of mass election fraud theories and the ex-administrator of 8chan, the site where the QAnon conspiracy theory originated – announced his run for Arizona’s district one congressional seat last week. He reportedly filed his first FEC report on Sunday.

Watkins recorded a video to announce his run outside of Arizona Attorney General Mark Brnovich’s office, congratulating Brnovich for investigating issues alleged by Cyber Ninjas in their final report of Maricopa County’s election processes. Since relocating to Arizona from Japan this year, Watkins has attempted to meet with Brnovich in person to discuss election fraud.

In his video, Watkins also claimed that the election was stolen from previous President Donald Trump. He promised to fix this by taking down the “dirtiest Democrat” in the “D.C. Swamp”: Congressman Tom O’Halleran (D-AZ-01), who Watkins called “Tom O’Hooligan.”

“I have decided to double down with God as my compass to take this fight to the swamp of Washington, D.C.,” asserted Watkins.

Watkins’s Twitter account, @CodeMonkeyZ, was suspended on January 8 along with accounts belonging to former federal prosecutor Sidney Powell, and Mike Flynn, the retired Army lieutenant general who briefly served as National Security Advisor for Trump. In a statement, Twitter explained that those accounts and others like them would be permanently suspended for violating their Coordinated Harmful Activity policy.

Watkins has platforms on Telegram and Gab.

The mass Twitter suspensions were part of a sweeping effort to eliminate certain rhetoric and content following the January 6 riot at the Capitol. Less than a week after the incident, Twitter removed over 70,000 accounts.

Certain prominent Republicans also supportive of the mass election fraud theory have run in some of the same circles as Watkins.

Gubernatorial candidate Kari Lake posed for a picture with Watkins last week, which Watkins posted with the claim that they’d shared dinner together. Lake didn’t post the picture. VICE News reporter David Gilbert claimed that Lake had dinner with Watkins, linking to an article he wrote relying on Watkins’s claim. VICE News also included a statement from Lake saying that she didn’t have dinner with Watkins.

In response to Gilbert’s tweet, Lake reiterated that she hadn’t dined with Watkins and that the picture was taken during an outreach event with over 75 voters in attendance. It is unclear if the article was updated after Lake’s tweet – no editor’s note or disclaimer was published.

“Hey Loser, Be a REAL journalist and contact the people you are writing hit-pieces on. I didn’t eat dinner at this event. I spoke with 75+ voters about my plans for AZ. Why are Leftists infatuated [with] this group? I hang out [with] Conservatives all day – no one ever talks about it,” wrote Lake. “I’d recommend an immediate correction to your propaganda piece and an apology to me and the rest of the world for your s****y reporting.”

Prior to December 2020, Watkins ran a user messaging board site, 8chan, owned by his father, Jim Watkins, and the birthplace of the “QAnon” conspiracy theory. The individual behind it, “Q,” claimed that a secret cabal of Satanic, cannibalistic pedophiles operate a child sex trafficking ring worldwide. Adherents also believe that this cabal and Trump were warring secretly; the cabal worked to undermine the previous president while Trump planned for a massive sting operation of the cabal.

Last week, Watkins announced publicly that QAnon doesn’t exist. Prior to this public denial, some rumored Watkins to be Q – speculations deepened by an HBO documentary released earlier this year.

“The fake news media continues to insist that I am part of some QANON conspiracy. As we all know, there is no QANON,” wrote Watkins. “What does exist are the many hardworking, God-fearing people who are breaking tyranny’s grasp over our Country.”

Controversial content isn’t new for Watkins or his father. The father-son duo were subpoenaed by the House of Homeland Security in 2019 to testify about “violent extremist content” that existed on their platform. Chairman Bennie Thompson (D-MS-02) claimed that there were least three acts of “deadly white supremacist extremist violence” that could be linked to 8chan that year, alluding to three mass shootings that had occurred.

The elder Watkins defended platform content the committee classified as “hate speech” as protected speech under the First Amendment. As for illegal content, Watkins assured the committee that moderators deleted the content as promptly as possible.