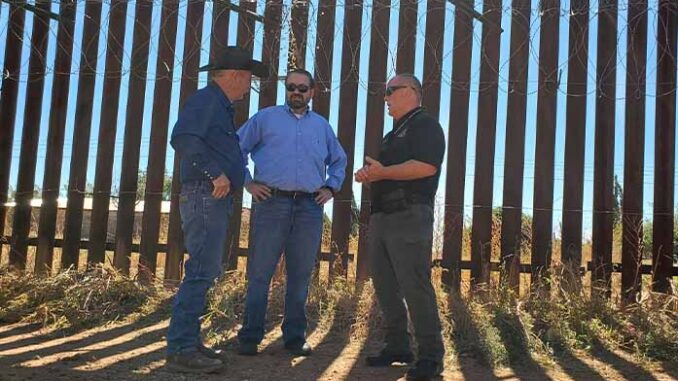 When Arizona Attorney General Mark Brnovich met Monday with stakeholders including Cochise County Sheriff Mark Dannels for an updated tour of the Arizona / Mexico border, he learned nothing has improved in the last 10 months.

Brnovich took part in an in-person briefing near Bisbee to discuss options for forcing or cajoling the federal government into acknowledging and then dealing with the border crisis which has seen hundreds of thousands of people from more the 160 countries cross into the southwest U.S. with little success by U.S. Customs and Border Protection officials, including the U.S. Border Patrol, in stopping them.

In an interview with AZ Free News after his border visit, Brnovich said the Biden Administration could make a significant and immediate impact simply by following existing federal laws. That includes deporting the more than 1 million non-citizen convicted felons and others who are the subject an Order of Removal.

Brnovich said deportations could start up very quickly, and would “send a signal that we will enforce our laws.” But instead, the White House continues to incentivize illegal border crossings while signaling “there are no consequences for breaking America’s laws,” he said.

Pushing for deportations is not something new for Brnovich or other state attorneys general. In January, President Joe Biden was asked to reverse an Inauguration Day order imposing a 100-day moratorium on most deportations. Under a 1996 law, such deportations should occur within 90 days of an immigrant receiving an Order of Removal.

According to Brnovich, the Biden deportation moratorium violated a law which went in effect in the waning days of Donald Trump’s presidency to require the U.S. Department of Homeland Security to provide a six-month notice to the State of Arizona before any immigration policies could be changed.

Brnovich also says he is concerned about the long-term effects of such lax immigration laws, which he called “the most important issue” facing the United States. And he worries that Arizonans and Americans “are becoming numb” to the statistics about the historic levels of unlawful immigration activities.

“The border crisis has the potential to negatively impact our country for generations,” he said. “It could alter the trajectory of our Nation. And it’s a tragedy in the clearest sense that it is preventable.”

Which is why the attorney general said it is important for lawmakers, politicians, and law enforcement officials from across the state to “get out of Maricopa County and see what is going on at the border.”

The border crisis is also why Brnovich finds it frustrating that the Biden Administration repeatedly demonstrates the rule of law no longer means anything. That leaves taxpayers to foot the bills.

“It is a fundamental unfairness,” he said, one which Sen. Mark Kelly “could stop tomorrow.”

According to the attorney general, all Kelly has to do to announce to Biden that border security and immigration must be addressed now.