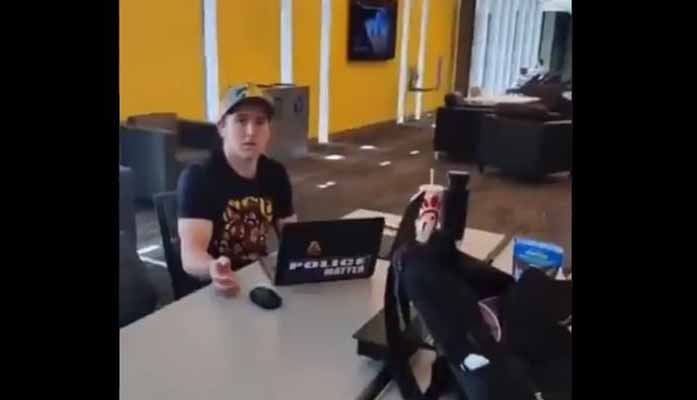 About two weeks ago, an incident occurred on Arizona State University’s (ASU) Tempe campus in which a group of activist students drove two students out of a study room. The two students happened to be displaying gear that could be construed as more conservative or Republican: a Bass Pro hat, a “Police Lives Matter” sticker, a Chick-fil-A cup, and a “Did Not Vote for Biden” t-shirt. Behind the camera were the activist students – members of the Multicultural Solidarity Coalition (MSC), a group that had been advocating for a multicultural space for years – who essentially wanted to maintain a “safe space” for people of color which they called their “multicultural center.”

AZ Free News looked further into this incident. We discovered several key facts: for one, the “multicultural center” wasn’t established officially at the time of the incident. This was discoverable in subsequent statements and interviews from MSC members involved in the incident.

Additionally, AZ Free News learned that there are several inconsistencies with one of the key activists behind the viral video: graduate student Sarra Tekola.

In an interview with Civic Cipher about a week after the incident, Tekola asserted multiple times that the two male students “didn’t know what the space was.”

Two of the other female students involved in the incident were also interviewed: Mastaani Qureshi, a history and justice studies undergraduate, alum liaison for the leadership sorority Omega Phi Alpha and co-president of ASU’s Women’s Coalition; and Miriam “Mimi” Araya, a Black Lives Matter (BLM) Phoenix policy minister, vice president of ASU’s Black Graduate Student Association, and doctoral student in justice studies in the School of Social Transformation. The pair concurred with Tekola’s assessment that the two students didn’t know they were in a place designated as a multicultural center.

Tekola also admitted that there were no official staff members, rules, aesthetics, or formal governance associated with the space. She blamed ASU officials for not properly outfitting and identifying the space as a multicultural center.

“This space only just opened up at the beginning of September,” said Tekola. “At that point, [I] became aware [that these students] must’ve not even known what this space is – that’s on ASU, that’s not on them. […] So these students didn’t know what the space was.”

Tekola and her activist group, the Multicultural Solidarity Coalition (MSC) said in their official statement in response to the incident that the multicultural center hadn’t been fully launched.

Yet, Tekola’s characterization that the space opened up at the beginning of September appears to carry its own inconsistencies. ASU’s newspaper, The State Press, indicated in a September 11 article that the center hadn’t launched. They reported that no further updates were provided in a meeting on the center and other social justice initiatives the day before, though Senior Vice President for Educational Outreach and Student Services James Rund had told the paper in August that the center would be running at some point that semester.

Tekola conflicting herself isn’t out of character for the PhD candidate. It appears that she, Qureshi, and Araya told Civic Cipher that they’d foregone “opportunities to respond via other media outlets.” However, Tekola interviewed with The Arizona Republic on or prior to September 29.

Inconsistencies of that caliber are more frequent than not in Tekola’s life.

Tekola Goes By Multiple Versions of Her Name

According to ASU, her graduate school profile knew her as “Sarra Tekola.” That profile was last archived on Friday. By Monday, the page was removed.

Tekola’s Instagram profile used to be @zebratekola, but she made it private after the incident.  Tekola even attempted to claim it wasn’t her, despite screenshots of her original profile and a shoutout linking to her profile from “Scary Movie” film series actress Regina Hall.

Now, Tekola has another Instagram profile called @sarratekola, likely created on Monday judging by the first post on the page. As of press time, her Twitter profile is still active, though it’s now private – @zebra425.

Finally, on her Facebook profile page, @zahara.teacola, and a GoFundMe for her arrest connected with multiple BLM protests, Tekola refers to herself as “Zahara Teacola.” The latest public post on that page occurred April 22, 2020, where she reposted something that’s since been removed claiming that the Kardashians were in blackface. Tekola asked if people decided that the Kardashians’ alleged blackface was okay because they “sleep with black men.”

At times, Tekola has opted to not give her name at all. In May, BLM Phoenix posted an interview of Tekola discussing her arrest last October for obstruction of a public thoroughfare and tampering with physical evidence (CR2020-130075). Those charges were later dismissed without prejudice.

Claims She’s a First-Generation College Student, and Father Was a ‘Climate Change Refugee’

Tekola has claimed repeatedly that she is a first-generation college student, and that her father was a “climate change refugee.” She claims that latter assertion inspires much of her work.

However, as first reported by the Arizona Daily Independent, Tekola is the daughter of Ethiopian refugee Fasil and Susan Tekola. Fasil attended an Ethiopian college prior to fleeing the violent communist revolution of the ’70s. Up until around 2016, Susan was a registered nurse and union member that advocated for socialized medicine. According to the Washington Department of Health, Susan had her credentials suspended in 2016 for “neglecting to respond to charges of being unable to practice with reasonable skill and safety due to concerns related to mental health issues.”

Susan wasn’t Fasil’s first wife – he told The Grist that he married an American woman named Debby to gain citizenship. Prior to their marriage, Debby was an English teacher that he’d met in Kenya and began dating.

The history of Tekola’s parents challenges her previous claims that she is a first-generation college student. Fasil had attended university while in Kenya. It’s likely Susan attended even more college: the state of Washington currently has required all registered nurses to have a bachelor’s degree.

Fasil also wasn’t a “climate refugee” as Tekola has claimed repeatedly. According to The Grist, he fled the violence in Ethiopia, not the drought. Fasil first fled to Nairobi, Kenya, then Israel, then Greece, before reaching Sweden. There, the Swedish government denied Fasil’s asylum application, deporting him back to Kenya. While in Kenya, Fasil studied wildlife range management in college for a year, before taking a job with the United Nations Educational, Scientific, and Cultural Organization (UNESCO).

Before his world was thrown into turmoil, Fasil Tekola lived a comfortable life in Ethiopia’s capital city, Addis Ababa. Born into a wealthy family, his father a colonel, he was one of only a few kids who drove their own cars to school.

The communists rounded up Fasil Fasil and “men of all ages, targeting the educated and wealthy, and gunned them down. Known today as the Red Terror, the genocide claimed more than 10,000 lives in Addis Ababa alone.

Tekola was 19 years old. He and other students were rounded up and jailed. But because his father was a well-known community leader and had left the military in the years preceding the war, he was later released. Two of his friends were not so lucky. After hearing about their murders, Tekola and a friend decided to flee the country.

Their escape began a journey that would send Tekola bouncing across the world in search of asylum. After years of traveling, he’d end up literally a half a world away in Seattle.

Tekola is also far from a victim of oppressive systems and circumstances, claims under which she’s aligned herself in her activism. The PhD candidate grew up in Maple Valley, Washington. According to census information, the median value of a house there from 2015 to 2019 was over $414,000, while median income in 2019 sat over $57,000. As Arizona Daily Independent noted, the median income in Tempe, Arizona, is just over $30,200.

Tekola also claimed in a poem she wrote that she was homeschooled growing up, but said her mother felt she was too naive about the “real world.” Due to that belief, Tekola recounted, her mother placed her in a private Christian school. Tekola said her main contentions with the school were the uniforms, authority figures, mean girls, and how easy the schoolwork was, so her parents put her in a public school.

Here’s what else we could discover about Tekola:

Tekola’s PhD dissertation suggests that decolonization is a solution for climate change, according to her profile on Academia.

“[Tekola’s] dissertation works on the social side of climate change focusing on creating the cultural change Western society needs to successfully implement climate solutions,” read the profile. “She is investigating the connections between climate change and colonization, and how the colonial trauma Western countries have affects our ability to address climate change today and what we can do to change this dynamic.”

Tekol further suggested on her profile with Happy Lab ASU, a collaborative project of ASU School of Sustainability Students, that the dissolution of Western society would solve climate change:

“My dissertation research focuses on identifying the social causes of climate change as affected by colonization.Specifically, I consider how the colonial mentality still prevalent in Western society, which promotes individualism, consumerism, egotism and hegemony, prevents us from the just transition required to address climate change. I am conducting action research, seeing what happens when Western consumers build relationships of solidarity with the people directly affected by their consumption. Right now we are working with the Black Mesa community who is being displaced from their traditional lands due to coal that is used to pump water to our city. My work is about creating the cultural change needed to successfully implement climate solutions, experimenting with decolonization as a climate solution.”

ASU couldn’t confirm or deny whether Tekola would be finishing her PhD candidacy due to the privacy rights of students, according to ASU spokesman Jerry Gonzalez.

Tekola co-founded the Phoenix chapter of BLM, and serves as the “co-minister of activism.” Like most of the other BLM protests in the wake of George Floyd’s death, peaceful BLM protests in Phoenix devolved into violence and looting last May. An estimated millions in damage resulted from rioters descending on Scottsdale Fashion Square. BLM Phoenix issued a statement after the riots that they were not involved.

Tekola was also the co-founder of Women of Color Speak Out, a group focused on making environmental activism accessible to people of color. That group lasted from 2015 to 2019. According to a pop-up notice that appears on the homepage, the activists parted ways due to ideological differences. None of the founders that AZ Free News contacted responded to our inquiries by press time.

Finally, Tekola was awarded the prestigious far-left Ford Foundation Fellowship in 2018 for a predoctoral expertise in “geography.” Factors considered for a predoctoral fellowship award include the applicant being a minority and focusing their studies or research on diversity and underrepresented communities. The current award sits at $27,000 for three years, exclusive Ford Fellows conference access, and exclusive Ford Fellows networking opportunities.

At the time of press, ASU hasn’t issued any further statements about the incident, or whether any of the students involved will face any penalties.