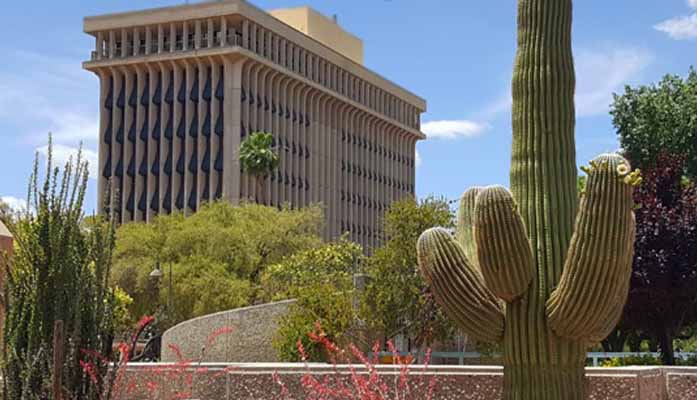 The City of Tucson has placed its controversial employee COVID-19 vaccine mandate on hold after Arizona Attorney General Mark Brnovich announced Tuesday that the city acted unlawfully last month when it passed an ordinance allowing for a five-day unpaid suspension of employees who do not provide proof of vaccination.

“Until we have a better understanding of our legal position in relation to today’s report, I have instructed staff to pause on the implementation of the policy,” Tucson City Manager Mike Ortega said after the attorney general issued his legal opinion on Tucson City Ordinance 11869 which took effect Aug. 20.

Brnovich’s opinion also noted that if the ordinance is not repealed within 30 days, he will advise State Treasurer Kimberly Lee to withhold millions of dollars from the city’s portion of state shared revenues until the city comes into compliance. He also said Tucson city officials could face potential liability claims from employees affected by the ordinance.

“Our office determined today that Tucson’s vaccine mandate is illegal, and the city could be held liable for attempting to force employees to take it against their beliefs,” Brnovich said. “COVID-19 vaccinations should be a choice, not a government mandate.”

A March 2021 report by the Arizona League of Cities and Towns estimated Tucson’s FY2021-2022 shared revenues at more than $175 million.

It is unclear whether simply putting enforcement of the ordinance on hold is sufficient for compliance with the attorney general’s 30 day deadline. Mayor Regina Romero said on Tuesday the city is reviewing its options and that she and the council “will need to provide direction as to how we proceed from here.”

Brnovich’s legal opinion came in response to an inquiry from Sen. Kelly Townsend about whether Tucson’s COVID-19 vaccine mandate for employees violated state law, particularly Senate Bill 1824 which prohibits the state and any cities, towns, and counties from implementing such a mandate.

After Brnovich’s announcement, Townsend (R-LD16 called on Tucson Mayor Regina Romero to formally end the city’s ordinance, which applied to not only current employees but applicants as well.

“It is imperative that we not only respect the rule of law, but that we not allow our fear of a virus to run roughshod over the rights of the citizens of Arizona,” Townsend. “I wish to thank the Attorney General for his response and I encourage every elected official and bureaucrat to remember that it is the people of this State that employ us and whom we answer to, not the other way around.”

But Townsend did not stop there, calling on Tucson city employees to pursue legal action due to the ordinance.

“I further encourage those who were forced into taking a COVID-19 vaccine against their will in order to maintain employment to seek damages and to hold [Romero] fully accountable for this illegal act.”

It is unclear whether any Tucson employees have been disciplined with suspension, or whether ongoing refusals have subjected employee to more severe discipline, such as termination.

Private businesses are exempt from the provisions of Ducey’s executive order and SB1824. However, last month Brnovich issued a legal opinion making it clear such COVID-19 vaccination mandates must allow for religious and medical exemptions for employees.

That legal opinion was also issued in response to a request from Townsend.