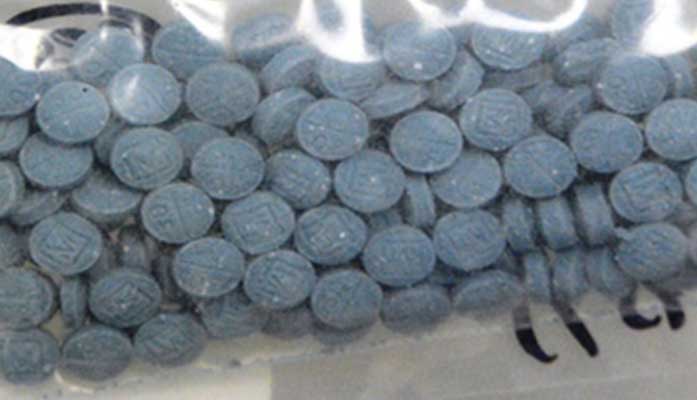 So far this year, Pinal County police have seized over 1.1 million M30 fentanyl pills. “M30” is a stamp on pills sometimes used to disguise a synthetic drug as the painkiller oxycodone, manufactured by pharmaceutical companies. The Drug Enforcement Administration (DEA) reported last year that a majority of fentanyl comes from the Mexican border.

Pinal County Sheriff Mark Lamb summarized the significance of these drug seizures. Lamb explained how the number of M30 fentanyl pill seizures jumped from zero in 2018, to around 700 in 2019, and over 200,000 in 2020.

Lamb explained that meth and fentanyl are being trafficked in pill form because people, especially kids, are more likely to take a pill than a needle in the arm.

“Not only are we dealing with the human trafficking issue, we’re also dealing with drug trafficking into this country. What the cartel has started doing is producing synthetic drugs, like methamphetamine and fentanyl. They can produce them in a lab 24 hours a day, 7 days a week,” explained Lamb. “Folks, this is a problem. What starts in my backyard today will be in your front yard tomorrow.”

In the post, Pinal County Sheriff’s office added that most of their deputies had never seen a fentanyl pill three years ago.

MORE THAN 1 MILLION PILLS SEIZED. Three years ago, most of our deputies had never seen a fentanyl pill. pic.twitter.com/w911ieDDnx

Fentanyl was one of the key drugs found in George Floyd’s system after his death. Floyd had approximately 11 nanograms per milliliter (ng/ml). Fatalities may occur at around 7 ng/ml of fentanyl when one or more other drugs are used conjunctively.

Floyd also had 19 ng/ml of meth in his system. The initial autopsy report added that deaths have been determined due to fentanyl at levels as low as 3 ng/ml.

Fentanyl is a synthetic opioid drug that is 50 to 100 times more potent than its most comparable drug – morphine. This drug accounts for the majority of opioid overdose deaths in the United States, according to the National Institute of Health (NIH).

Since President Joe Biden took office, reports of increased drug trafficking have coincided with the historic surge of illegal immigrants. The situation worsened to the point where non-border states were lending their law enforcement to the southern border; South Dakota recently brought their National Guard home after Texas gained a handle on their end of the crisis.