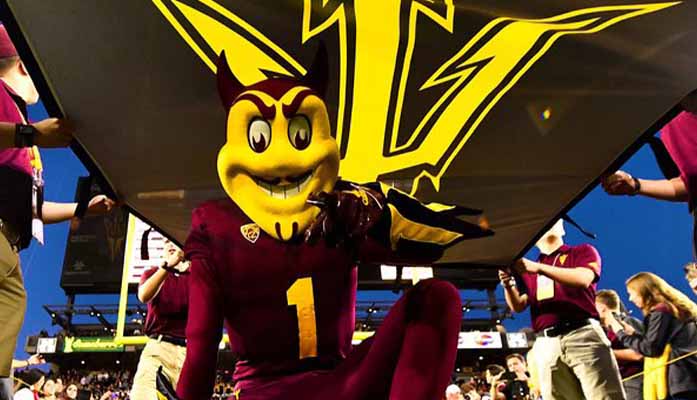 A year-old petition to change Arizona State University’s (ASU) mascot from the “Sun Devils” to “Sun Angels” was resurrected after a poll revealed significant public opposition to the current mascot.

Renewed interest in the petition began last week following a survey claiming that people found Sparky the Sun Devil to be one of the most disturbing and offensive mascots. Sparky ranked 7th for the most disturbing mascot, and 8th for the most offensive. News reports on the survey cited the petition to trade Sparky’s horns for a halo as an example, breathing life back into the effort.

The petition, started by ASU alumni Joseph Forte, Jr., questions cultural complacency with the idea of celebrating the devil in any capacity. Forte cited ASU’s track and field program and booster organization as precedents for changing the mascot. The track and field stadium is named, “Sun Angel Stadium,” while the fundraising club was known for decades as the “Sun Angel Foundation” before rebranding to the “Sun Devil Club.”

“What once might have been viewed as acceptable – is now just plain demonic. Anyone with an ounce of Christian belief will have a hard time pledging allegiance to…being loyal to…or spending money with the devil. With every T-shirt, souvenir and game ticket [ASU] sell[s], they solidify their consent that idolizing the devil is just ﬁne with them,” wrote Forte. “Your support sends a strong message that there is a big difference between school spirit and glorifying the devil.”

Forte further pledged his case by noting that less than 900 people approved of the mascot name when it was established in 1946 – the fourth in the university’s short history. He noted that the goal of this petition wasn’t to turn ASU into a religious school – just to save it from being “demonic.”

“Keep in mind the Archangels cast the devil out of heaven, so the devil is actually history’s biggest loser. The Archangels on the other hand can only be considered victorious winners,” wrote Forte. “And, for those narrow-minded enough to think that all this devil talk is just a tongue-in-cheek reference to the hot weather in Arizona, the Archangel Gabriel is also known as the Angel of the Sun – completely in line with Arizona’s hot weather in what is known as the “Valley of the Sun” to all who live in the Phoenix area.”

AZ Free News spoke with Forte about the origins of the petition, and where he stands now. He said that he hasn’t really done anything with the petition since last year, because his business takes precedence currently. Forte shared that he’d heard about the renewed interest in his petition through a friend who’d seen a recent report from AZ Central mentioning it, and the subsequent criticisms that came.

In an update posted to the petition on Sunday, Forte elaborated that ASU students and alumni were chief among his harassers.

“Now I have a whole bunch of ASU students and alumni complaining, contacting me, and telling me that I’m a loser, I’m soft, I don’t have anything better to do with my time, etc. Yet they’re triggered and wasting their time about this petition that has been dormant for months. Funny how that works huh?!” wrote Forte.

Another thing Forte noticed was the lack of support from those who wanted to change other mascots and figures, like the Washington Redskins and Aunt Jemima. Forte speculated to AZ Free News that this surface-level inconsistency had a deeper meaning – those normally in favor of changing things they find offensive won’t support the Sun Angel petition because it’s a Christian issue at its core.

“Half of the petition was obviously my strong feeling that I don’t want to praise the devil anymore, but it also had to do with the hypocritical nature of the woke mob because they’re all for tearing down many things – but if it’s something to do with Christianity, they say we can’t do that,” observed Forte.

Read about the petition in its entirety here.