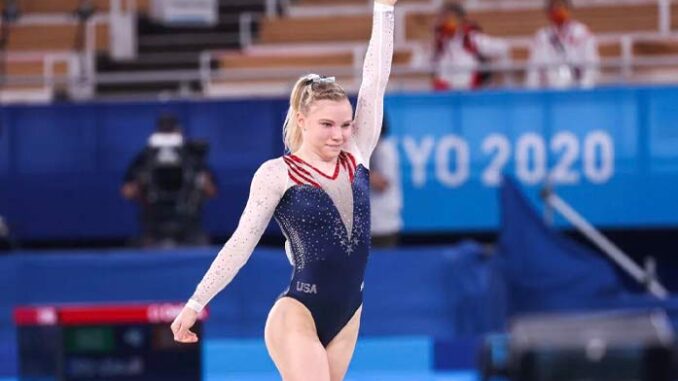 “Am I the only one who hasn’t watched ANY of the Olympics?” wrote Lake. “How did we end up with athletes who hate our country representing it in competition and in very public display of disrespect to the U.S.A.?”

Am I the only one who hasn’t watched ANY of the Olympics?

How did we end up with athletes who hate our country representing it in competition and in very public displays of disrespect to the U.S.A.? https://t.co/BcRr1qVZaS

In response, Twitter users asked Lake why she was focusing on the few Olympians disrespecting the country versus the many representing the nation proudly. Lake issued the tweet after one Arizona Olympian – Phoenix gymnast Jade Carey – won gold. The day before, Lake retweeted a congratulatory post for Gilbert gymnast MyKayla Skinner, who secured the silver medal on vault after receiving a Cinderella opportunity to compete once teammate Simone Biles withdrew from several events.

In a statement to AZ Free News, Lake said that she stood by her statements because elected officials aren’t standing up against athletes who denounce America.

“I’m leading in the polls because I will NEVER back down from doing what’s right. Arizonans are tired of weak, recycled politicians that sit on the sidelines and say NOTHING while others trash this country,” said Lake. “The behavior of these ‘woke’ athletes hurts the other Olympians and hurts our country. For every veteran who’s ever fought to protect our freedoms and every service member that has given their life on this battlefield – I promise you this: I will never kneel to the Marxist mob that seeks to destroy our great nation.”

Lake’s spokespersons added that she’s happy to see Arizonans are making a big splash, but believes strongly that the wokeness in sports is causing a big turnoff.

Lake’s comment reflected some of the viral incidents in which American Olympians have expressed shame or derision for the country publicly.

In the Olympic trials last month, hammer thrower Gwen Berry captured national attention for turning away and draping her head with an “Activist Athlete” shirt while the National Anthem played.

The other two qualifiers, Missouri’s DeAnna Price and California’s Brooke Andersen, received significantly less attention – though the pair both paid respect to the national anthem and Price had a record-breaking throw nearly 7 feet longer than Berry’s.

All three of the American hammer throwers are in Tuesday’s final.

Then this past week, South Carolina’s Raven Saunders gave a lengthy speech on social justice activism and held her arms overhead in an “X” to signify the oppressed during the medal ceremony. Saunders received silver for her shot put performance.