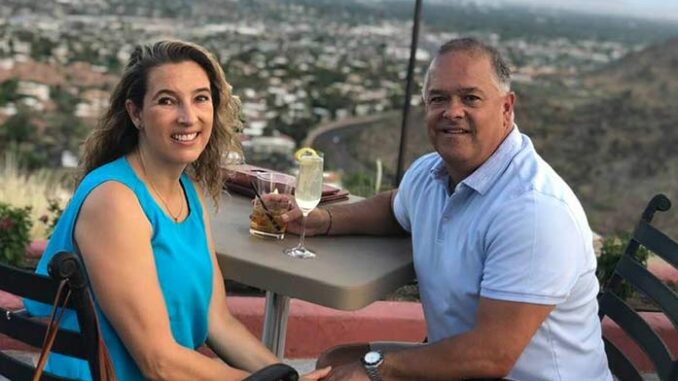 On Monday afternoon, Dale Henson and his attorney are slated to appear before a federal magistrate in Phoenix to argue why Henson, a Chandler resident, should be released from detention to await trial on 58 counts related to financial crimes, including money laundering and defrauding two government agencies.

Dale Henson and his wife Zoila Villa Henson were arrested Aug. 18 after a 17-month FBI investigation into $1.2 million of allegedly falsified medical billings to the Arizona Health Care Cost Containment System (AHCCCS). The investigation also found allegedly illegal activity connected to the couple’s use of $150,000 in COVID-19 Economic Injury Disaster Loans from the Small Business Administration.

Court records show Dale Henson was ordered at his initial court appearance to be held by the U.S. Marshals Service until a formal detention hearing on whether he poses a flight risk, as Assistant U.S. Attorney Monica Klapper contends. That is what U.S. Magistrate Deborah Fine will decide Monday.

Zoila Henson’s name does not appear on the court’s detention hearing calendar this week, possibly because of her status as a Mexican citizen.

The arrest of the Hensons, both age 53, was announced Aug. 20 by the U.S. Department of Justice. However, AZ Free News is aware of several search warrants executed last fall in connection to the Hensons and those they did business with.  Some of the searches were conducted at commercial locations while others took place at residences across Arizona.

According to the Aug. 3 indictment, Henson Family Services LLC and Henson Holdings LLC were hired in 2019 by a behavioral health facility in Mesa to handle the facility’s medical billing. But the Henson entities are alleged to have billed and received payment from AHCCCS on 25 occasions from August 2019 through April 2020 for services which were not rendered to the facility’s patients.

In addition to the 25 AHCCCS fraud counts, the indictment includes 25 counts of aggravated identity theft for using names and birthdates of the facility’s clients on the fraudulent billings, 6 counts of money laundering, and 2 counts of wire fraud. The wire fraud is related to the alleged misuse of two COVID-19 government loans issued to the couple’s businesses.

It is unclear how AHCCCS approved the couple or their businesses to work with Arizona healthcare companies given that the State of Nevada terminated a contract with Henson Family Services, Dale Henson, and Zoila Henson in January 2019. A Nevada Office of Inspector General report also shows three-year sanctions against all three by the Nevada Medicaid system.

But by mid-2020, the couple was actively engaging new clients in Arizona. Arizona Corporation Commission (ACC) records showed Zoila Henson as statutory agent for 24 businesses, the majority of which appear to be healthcare related.

In March 2020, Dale Henson uploaded several photographs of his Chandler residence to his Facebook page. That same month, the couple issued a $309,103 cashier check to Great American Title, which is one of the six acts of money laundering charged in the criminal indictment.

Three of the other transactions involve more than $312,000 in checks written to the Wisconsin-based Lutheran Indian Ministries. The other two money laundering charges relate to $11,390.73 paid to Nordstrom department store in February 2020 and a $15,000 check written to “K.B.” in March 2020, according to the indictment.

Dale Henson will be represented at Monday’s detention hearing by Michael Kimerer. Among the arguments put forth by Klapper of the U.S. Attorney’s Office is that pretrial detention “is appropriate when the United States demonstrates either flight risk or danger to the community.”

Such a risk is posed by Dale Henson, according to Klapper, in part because of recent real estate transactions by the couple, including the $1.3 million purchase of a home last year which they recently sold.

“The Hensons also purchased five other pieces of residential or commercial real estate in the Phoenix metropolitan area, valued at millions of dollars – all of which was recently sold,” Klapper wrote to the court, adding that the couple have “few remaining connections to Arizona and have many connections to Mexico, where Zoila Henson is a citizen.”

The proceeds of those sales have been captured by state authorities pending forfeiture, according to the U.S. Attorney’s Office. The capture appears to be related to a separate state investigation into healthcare fraud.

A review of Dale Henson’s Facebook page reveals a public post in which he notes having a brother-in-law who is a captain with Aeromexico. Information on Zoila Henson’s attorney was not available as of press time.