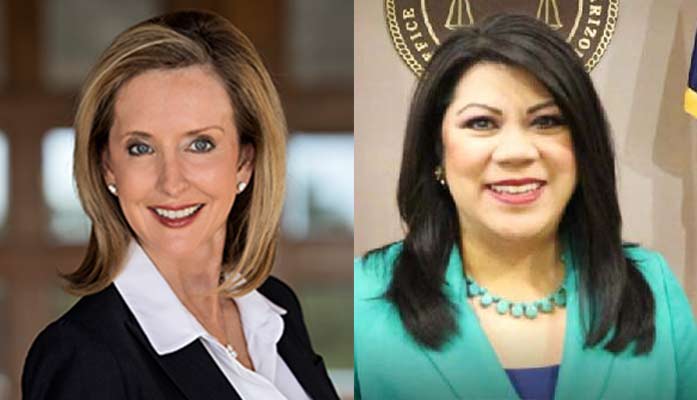 On Monday, Arizona State Treasurer Kimberly Yee, and Arizona Board of Regents member, Karrin Taylor Robson, announced their plans to run in the governor’s race.

The announcements have been expected for some time.

Yee has spent most of her adult life working in the government sector.

Yee served as executive fellow for the Office of the California State Superintendent of Public Instruction, program and policy analyst for Wilson on the California State Board of Education. She served as deputy cabinet secretary for the Office of Governor Arnold Schwarzenegger, before becoming director of communications and government affairs for the Arizona State Treasurer’s Office.

Yee was appointed by the Maricopa County Board of Supervisors to the Arizona House of Representatives to replace fellow Republican Doug Quelland after he was ousted for violating Clean Election Limits. She was later elected to the State Senate. She was elected to the Treasurer’s Office in 2018.

Taylor Robson was appointed to the Arizona Board of Regents in June of 2017 by Governor Doug Ducey.

Taylor Robson is the founder and president of a development company, Arizona Strategies. Prior to forming Arizona Strategies, Taylor Robson served as executive vice president of DMB Associates, Inc., a Scottsdale-based master-planned community developer. Prior to DMB, she was a principal with the law firm of Biskind, Hunt & Taylor, P.L.C., where she practiced in the areas of land use, development and zoning law representing large land owners on complex land use cases.