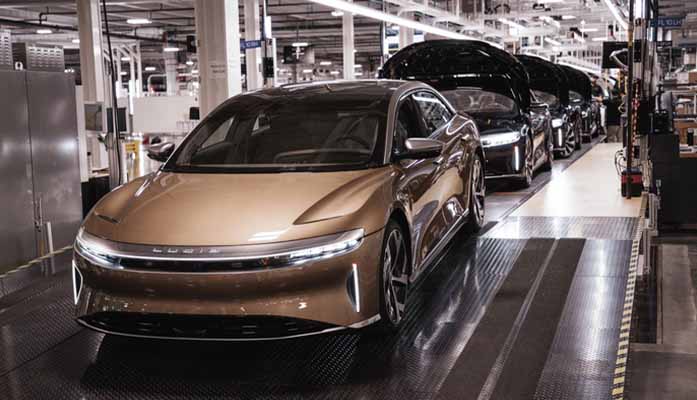 State Senators will have a chance Monday afternoon to hear a comprehensive update on the rapidly growing presence in Arizona of EV manufacturer Lucid Group.

Daniel Witt, head of State & Local Public Policy for the California-based automaker, is set to testify at 2 p.m. before the Arizona Senate Transportation Committee. The company produces its Lucid Air – the 2022 MotorTrend Car of the Year – at its Lucid Motors manufacturing facility in Casa Grande.

Among the topics Witt is expected to address is ongoing construction at its Casa Grande facility where deliveries of Lucid Air began last October. Other topics he will testify about the company’s hiring progress and workforce issues, including the need for support for technical skillset training in rural communities.

Lucid announced plans in late 2016 for a $700 million production facility to be built in Casa Grande on more than 500 acres owned by Pinal County. Construction began on phase one of the four phase project in late 2019, making it the first greenfield facility for EV manufacturing in the United States.

The first-phase of the Case Grande facility was completed in December 2020, with the initial delivery of Lucid Air vehicles coming less than a year later. There are now hundreds of Lucid Air vehicles on the road across America. The car is now the longest range, fastest charging luxury electric car in the world.

Phase two construction in Casa Grande is ongoing and will increase production capacity significantly, according to the company. By 2030, Lucid is expected to have created nearly 6,000 direct jobs with an economic impact in the state of more than $100 million.

With that expansion comes the growing need for trained technical workers.  Last year Gov. Doug Ducey celebrated the opening of Drive48, a state of the art manufacturing training center in Coolidge.

Drive48, which is part of the Central Arizona College, provides specialized training in the fields of automotive, advanced manufacturing, heavy equipment, and general industry. However, Witt is expected to address the necessity for expanding technical training programs at other community colleges across the state.

Witt is also slated to discuss Lucid’s broader economic footprint in Arizona. In addition to the AMP-1 in Casa Grande, the company has its Powertrain Manufacturing facility on the same property and is looking to establish production of its newly designed Gravity SUV in Arizona next year.

Lucid Motors also has a sales studio at the Scottsdale Fashion Mall and a separate service center in Scottsdale.

Last November, MotorTrend announced its 2022 Car of the Year award, selecting  the Lucid Air from a field of 24 competitors among several major manufacturers based on six key criteria: efficiency, value, advancement in design, engineering excellence, safety, and performance of the intended function.

The Lucid Air came out on top against finalists such as Mercedes‑Benz S-Class, Mercedes-Benz EQS, and Porsche Taycan. It is the first time the initial product of a new automotive company has been awarded MotorTrend’s flagship Car of the Year award.

“Our objective of achieving range through efficiency and technical innovation is crystallized in Lucid Air, and we’re elated that this effort has been recognized by MotorTrend against such formidable competition from well-established automakers,” CEO / CTO Peter Rawlinson said at the time.

Also last year, Lucid Group, Inc. joined the Nasdaq-100 Index, which is designed to measure the performance of 100 of the largest Nasdaq-listed non-financial companies, based on market capitalization.

Arizona is already home to Mesa-based EV passenger truck manufacturer Atlis Motor Vehicles as well as Phoenix-based Nikola which has a production facility in Coolidge for its EV commercial trucks. And last year, Vancouver-based ElectraMeccanica broke ground on a technical center and assembly facility in Mesa for its three-wheeled, single occupant EV.