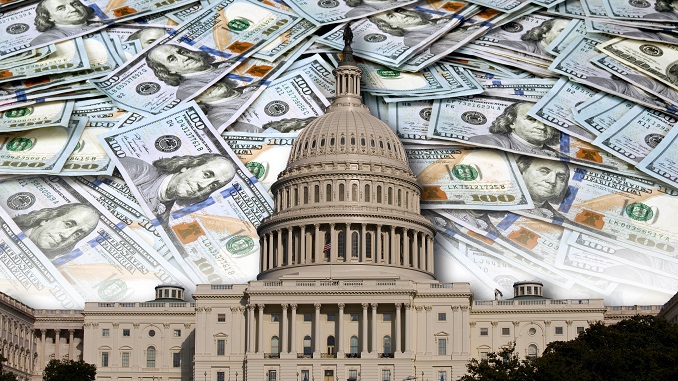 Republicans Get One More Chance to Do the Right Thing

The last time Republicans lived up to their reputation for sound fiscal policy was almost 30 years ago. In March 1995, Speaker Newt Gingrich and the Republican House caucus, to the jeers of skeptics, resolved to balance the federal budget within seven years. They did it in four.

Yet ever since, Republicans have provided slight protection against the unending torrent of Democrat spending schemes. They talk a brave game of cutting when out of power but are mostly unable to curb their political urge to spend when they have the authority.

Consequently, the national debt doubled from $5 trillion to $10 trillion under the inattentive George W. Bush. Candidate Donald Trump in 2016 promised to pay down the debt completely over eight years. Sure. In just four years, the debt surged by $7.8 trillion, a 36% hike.

We’ve all seen the drill. Create an emergency spending need where none exists (climate change) or which could better be addressed in a more measured way (COVID), exaggerate the danger, create panic, open the spigot, take credit.

$4.1 trillion in new spending during the Biden years for these created “emergencies” have put Americans in extremely dangerous fiscal territory. The voters this time gave House Republicans one more chance to redeem themselves. Now the stakes are higher than ever, and the pressure is on.

The early rhetoric was promising. However, vows to “curb wasteful government spending” were followed by…reinstatement of earmarks. Those little pieces of unvetted local pork slipped into spending bills to benefit individual legislators. What a crushing disappointment.

Republicans swore off earmarks in 2011. But when a Democrat Congress brought them back in 2021, 120 Republicans partook, scooping up $5 billion for their own Bridges to Nowhere. A motion this year to disallow earmarks was overwhelmingly defeated in the Republican caucus.

15 conservative policy groups cautioned Republicans that “earmarks are one of the most corrupt, inequitable and wasteful practices in the history of Congress.” Each congressman earns his little cookie by supporting all of his colleagues’ polite graft.

Yet GOP appropriators claimed earmarks were their “constitutional duty” and actually help to control spending! What a crock.

The Republican face plant over a matter so obviously wrong gives fiscal conservatives the sinking feeling that they may not be up to the fight. Candidates barely mentioned the deficit/debt during the last election, in contrast to previous campaigns. What fiscal crisis?

Instead, Americans have been conditioned by their politicians to believe that no wants should be unmet, that we “deserve” lavish government benefits unyoked to effort, that thorny political issues from illegal immigration to educational failure can be solved by simply spending more, and that any fiscal consequences can be safely kicked down the road.

Republicans aren’t going to dig out of this hole any time soon. But they can start the process by doing the right thing right now.

As this is written, Republicans are negotiating an omnibus budget bill of nearly $2 trillion. The leadership has known for nine months this must be completed by year’s end, but once again thoughtful, thorough budgeting has given way to a 4,155-page bill delivered at 1:30 AM to legislators who can’t possibly understand its provisions.

The bill contains no program cuts, but instead a mix of mandatory spending, outrageous pork like LGBTQ “Pride Centers,” and a specific prohibition against funding for border security. Lawmakers must approve the bill now or, in the case of Republicans, be held liable for the dreaded government shutdown.

But economist Steve Moore has a better idea. Republicans only need to refuse to waive provisions of the 2010 Pay-As-You-Go Act. PAYGO has been routinely suspended in recent years, but just 41 of 50 senators refusing this time would result in $130 billion in mandatory “sequester” cuts, just 5% of the Biden spending splurge.

Alternately, Congress could cancel the $80 billion for 87,000 new IRS agents, take back $500 billion in unspent COVID funding, and/or scale back the “Green New Deal” subsidies, a relatively painless way to uphold the PAYGO rules.

Congressional Republicans will never have a better opportunity to begin the return to responsible governance. If they don’t have the will now, when will they?