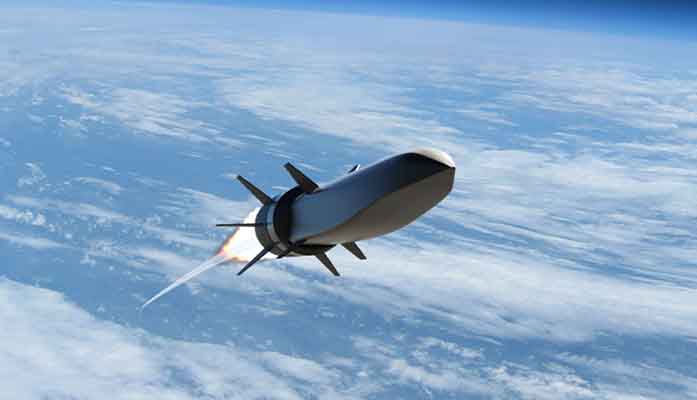 It was announced last week that two defense contractors with a large presence in Arizona will partner on one of the U.S. Air Force’s most cutting edge weapons—a hypersonic air-breathing missile capable of sustained speeds of Mach 5 or greater.

Tucson-based Raytheon Missiles & Defense has been selected along with Northrup Grumman Corp. to deliver a first-of-its-kind Hypersonic Attack Cruise Missile (HACM) which utilizes a scramjet engine that forcibly compresses incoming air with a hydrocarbon fuel for combustion to travel at least five times the speed of sound.

This allows a HACM to reach its targets more quickly than similar traditional missiles, allowing it to potentially evade defensive systems, according to the companies which have been working together since 2019 to integrate Northrop Grumman’s scramjet engines onto Raytheon’s air-breathing hypersonic weapons.

In July, they conducted the second successful flight test of a Hypersonic Air-breathing Weapon Concept (HAWC) for the U.S. Air Force and the Defense Advanced Research Projects Agency.

During the flight test, the concept weapon was released from an aircraft and accelerated to hypersonic speeds using a scramjet engine. The vehicle then flew a trajectory which engineers designed to intentionally stress the weapon to explore its limits and further validate digital performance models from the first flight test in September 2021.

“The second flight test is a big step toward scramjet technology being mission ready,” Dan Olson, vice president and general manager of Weapon Systems for Northrop Grumman said at the time. “Nearly twenty years of scramjet propulsion research and development have come to fruition to significantly advance our nation’s weapon capabilities.”

The contract announced earlier this month now calls for Raytheon Missiles & Defense and Northrop Grumman to finetune development of the concept technologies and deliver operationally ready HACMs to the U.S. Air Force.

“Advancing our nation’s hypersonic capabilities is a critical national imperative, and this was an important step forward,” said Wes Kremer, president of Raytheon Missiles & Defense, in August. “Having back-to-back successful flight tests gives us even greater confidence in the technical maturity of our HAWC operational prototype.”

“It’s hard to recreate in the real world the most advanced threat scenarios, and that’s especially true in hypersonics,” Kremer said after the July flight test. “But we have the power to model a hypersonic flight regime. Advances in artificial intelligence, machine learning and big data allow us to develop capabilities at scale in a way that wasn’t possible before.”