On a 31 to 29 party line vote, the State House passed The Unbiased Teaching Act, also known as SB1532, following a derisive debate during Wednesday’s floor session.

An amendment introduced this week by Rep. Michelle Udall (R-LD25) to a school operations bill bars racist, sexist, and one-sided politicized instruction in Arizona schools, including concepts related to Critical Race Theory. It also allows for civil litigation against teachers, administrators, and other school employees who violate the Act.

Under SB1532, a school district, charter school, or state agency is prohibited from requiring a teacher, employee, or visitor to discuss controversial issues of public policy or social affairs unless the subject is essential to course learning objectives. If a teacher presents a controversial issue, it must be conducted with “diverse and contending perspectives” without deference to any one perspective.

“Political advocacy, propaganda, and biased, one-sided viewpoints taught as fact have no place in a classroom,” Udall said after the vote. “If dealing with a divisive controversial topic, educators should present the subjects in a responsible, balanced way that encourages students to think for themselves and draw their own conclusions.”

SB1532 as amended was transmitted Wednesday to the Senate for a vote. The Republican Senate Caucus only holds a 16 to 14 majority, so getting the bill to Gov. Doug Ducey’s desk will require full Republican support unless some Democrats unexpectedly cross the aisle.

Passage in the Senate, however, is not a sure bet due to statements by Sen. Kelly Townsend (R-LD16) that she will not vote for any further legislation this session until the Senate’s ongoing audit of the Maricopa County 2020 general election is finished.

The Unbiased Teaching Act allows the Arizona Attorney General or the appropriate county attorney to initiate legal action in superior court for an alleged violation of the controversial issues prohibition. If further prohibits requiring a teacher, administrator, or other school employee to engage in training, orientation, or therapy that presents any form of blame or judgement on the basis of race, ethnicity, or sex.

A judge could impose a civil penalty of not more than $5,000 against a person who knowingly violates the Act or aids in a violation. The bill also permits the Attorney General or a county attorney to bring legal action against any school district or charter schoolteacher, administrator, or other employee, as well as state employee who uses public funds to violate the prohibitions.

Another provision ensures students cannot be required to affiliate with or engage in service learning that involves the student participating in lobbying for legislation at the local, state, or federal level or in social or public policy advocacy.

Also on Wednesday, a party line vote led to House passage of SB1074, which started out as a routine public entity auditing bill before being amended by Rep. Jake Hoffman (R-LD12) with language similar to Udall’s SB1532 amendment.

SB1074 as amended bans the state, state agencies, and political subdivisions such as counties, cities and towns, and community colleges from requiring employees to engage in the same type of training, orientation, or therapy prohibited in SB1532 if it involves presents any form of blame or judgment on the basis of race, ethnicity, or sex.

Training related to sexual harassment is specifically excluded from the mandates in SB1074. 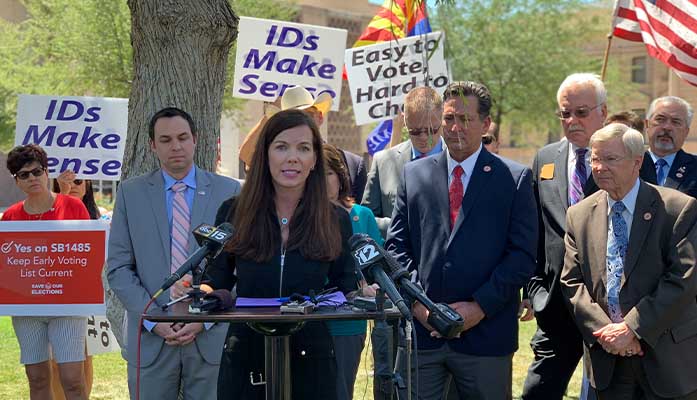