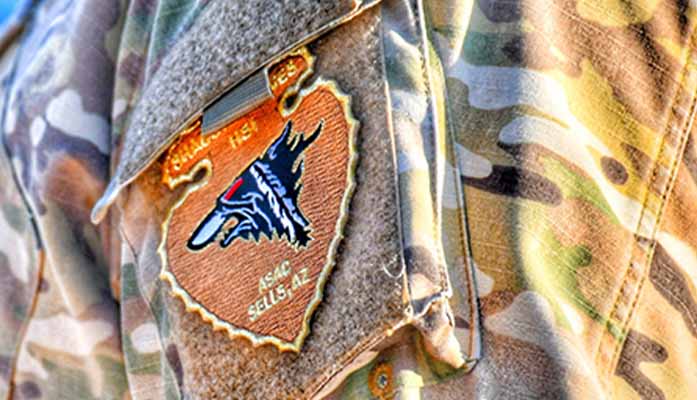 A small but elite unit of tactical officers known as the “Shadow Wolves” working out of the Tohono O’odham Nation will continue to patrol a 76-mile stretch of shared border with Mexico, but now they will do so as special agents of Homeland Security Investigations (HSI).

The units efforts have been focused on patrolling the lands of the Tohono O’odham Nation, which encompass 4,400-square miles in Maricopa, Pima, and Pinal counties. But on April 19, the Shadow Wolves Enhancement Act was signed into federal law to reclassify the tactical officers, giving them additional authority to investigate, interdict, and disrupt criminal activity as HSI special agents.

HSI falls under the direction of U.S. Immigration and Customs Enforcement (ICE) and is the principal investigative arm of the U.S. Department of Homeland Security. As such, it is responsible for investigating transnational crime and threats, specifically criminal organizations which exploit the global infrastructure through which international trade, travel, and finance move.

Reclassifying the Shadow Wolves preserves the unit’s historic legacy while broadening the authority of its members to further U.S. national security missions, according to ICE Acting Director Tae D. Johnson.

“The Shadow Wolves Enhancement Act will dramatically increase agency effectiveness in targeting and disrupting human and drug smugglers throughout the rugged terrain of the Sonoran Desert and across tribal lands,” Johnson said.

Scott Brown, the special agent in charge of HSI-Phoenix with responsibility for the entire state called the Shadow Wolves “an unparalleled law enforcement unit.” HSI will develop a strategy to expand the Shadow Wolves program and recruit new members, Brown said.

“It is with tremendous pleasure and pride that I will be welcoming the Shadow Wolves as HSI special agents,” Brown said. “After nearly 50 years since their establishment, their experience and impressive history, it is paramount we give this team the tools needed to grow as law enforcement officers.”