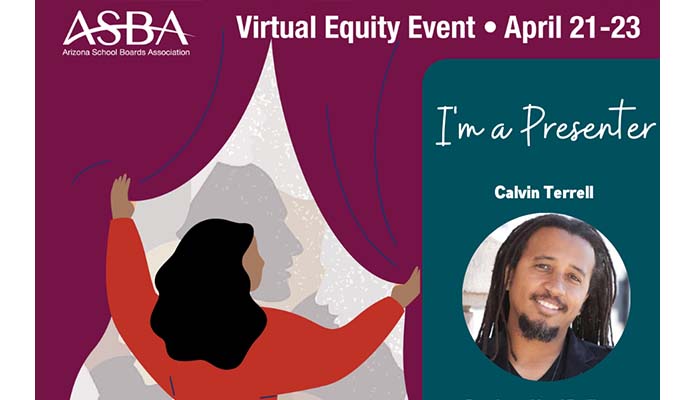 The Arizona School Board Association (ASBA) held The Equity Event April 21st – 23rd. Among the keynote speakers was the founder and lead facilitator of Social Centric Institute, Calvin Terrell.

ASBA is the primary source for policies adopted by public school governing boards across Arizona. Critical Race Theory is currently being discussed by educators who hope to adopt and implement it into schools statewide.

Many parents and school board members have questioned Critical Race Theory-based curriculum. Those that question the curriculum and disagree with the implementation are being called “toxic,” “evil,” “bigots,” etc., and Terrell says they should be removed and states that those people are creating “whitelash.”

“Whitelash” is a term that Terrell uses to describe people who disagree with what he says or believes.

In his TEDx talk at Phoenix College, Terrell promoted the bizarre Aztec-based mysticism embodied in a creed students were forced to adopt as part of the Mexican American Studies classes in the Tucson Unified School District. Concerned teachers noted that the premise of the creed was one that prompts a student to adopt a collective and or amorphous identify rather than an identify as an individual.

Terrell spoke to school board members at last month’s event about how they can help end the “deification of whiteness and the demonization of non-whiteness.”

Terrell criticizes the media for posting lies or half-truths often does it himself. During the event, he stated, without evidence, that the reason the Irish and Scottish immigrates play bagpipes during police funerals is that when they first immigrated to America to prove themselves to the whites, they became overseers of slaves.

With a quick Google search, that statement can be proven false. Experts say by providing false information like accusing a group of people of being slave overseers can only lead to the dangerous outcome of villainization and dehumanization. A technique used by some of the most heinous regimes known to man.

Terrell told board members “when you can name your part in social sickness, you can identify your role in the remedy. Be part of the healing.”

Terrell spoke freely of eliminating voices from conversation – and schools – that do not comport with his own world view.

When word of Terrell’s statements became public, the ASBA rushed to defend his divisive message and released the following statement:

Public schools have a responsibility to ensure the highest ideals of justice, citizenship, and human dignity are demonstrated and upheld, from the governing board table to the classroom. They must stand committed to leading toward and advocating for more equitable and inclusive educational environments, free of racism, where every student, teacher, staff, parent, and community member is treated with dignity and respect. As an association, we have that responsibility, too, and we take it seriously.

In fact, in June 2020, the ASBA Board of Directors passed a resolution condemning racism and affirming the association’s commitment to equity – the opportunity, access, and inclusion necessary for every student to succeed. The resolution affirmed that “purposeful action against all forms of racism, both individual and organizational, is necessary to dismantle racism.”

Today, an Arizona talk radio host targeted two Black leaders who spoke at our invitation at the ASBA Equity Event. Although the event featured 30 speakers from a wide variety of backgrounds and races and tackled the difficult but important subjects of culture, race, and ethnicity and their impact on students and education, these two speakers — who were black — were singled out, maligned and their comments were mischaracterized. As an organization committed to equity and also to being anti-racist, we believe it necessary and appropriate to condemn this.

In addition to being simply wrong, such tactics and portrayals harm all students. When concepts like equity are wrongly defined or misinterpreted, with racist intent or not, it puts up roadblocks to the school board’s essential work of building greater opportunity, access and inclusion so that every student can succeed, regardless of their culture, race, ethnicity, family income, home setting, ability, gender or any other influence or characteristic that can contribute to inequities.

We have never shied away from the fact that the pursuit of greater equity is hard work. It’s part of our core beliefs. Rest assured, we will not shy away from the work itself, either. Arizona’s students are worth it – and they are counting on us.

We have said it before and will continue to say it again. School board members should never feel that they are placing themselves or their families at risk by serving their communities or doing what is right for kids. Remember, ASBA is here to serve you and will always be your association.”

Still, parents have questions. Among those unaddressed by ASBA is a simple one: are parents and/or board members not allowed to question what is being presented to them without being seen as “racist?” Parents want to know how they are supposed to feel comfortable and approve of the Critical Race Theory curriculum when the information their kids are being provided many times is based on misinformation or at times, outright lies?