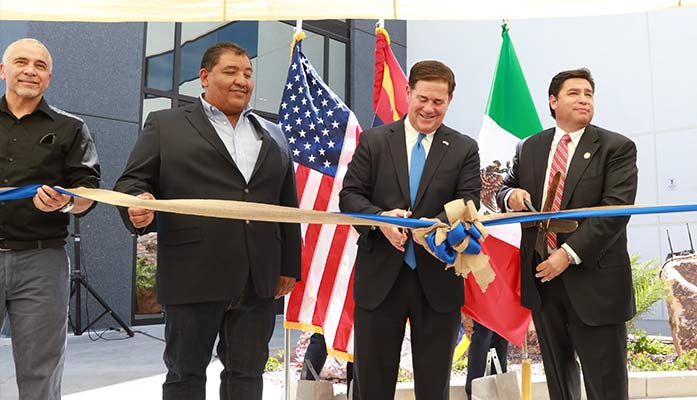 The grand opening of a 60,000 square foot refrigerated warehouse in Nogales was used by Gov. Doug Ducey this week to draw attention to Arizona’s strong trade relationship with Mexico, the state’s top trading partner.

Ducey traveled to the Santa Cruz County border city Wednesday at the invitation of Jaime Chamberlain, president of Chamberlain Distributing which imports fruits and vegetables from the northern Mexico state of Sonora. The governor toured the facility and took part in an economic roundtable with local business and community leaders focused on Arizona’s economic relationship with Mexico.

I’m eager to see the success of Chamberlain Distribution’s St. James Cooler and the continued growth of Nogales. Grateful to all the businesses and everyone who makes Santa Cruz County a shining example of international commerce and trade! pic.twitter.com/RIkbaZLIqd

Nearly $16 billion in trade occurred between Arizona and Mexico in 2020, with more than $13 billion of that passing through the Nogales Port of Entry. And this month, the University of Arizona released its First Quarter 2021 AZMEX report of economic indicators showing Arizona exports into Mexico reached its highest level since mid-2019.

Ducey said commercial truck traffic into Arizona from Mexico increased by more than 2,500 vehicles in 2020 despite the COVID-19 pandemic which continues to restrict border crossings to essential traffic only. The new Chamberlain facility will help further Arizona’s relationship with Mexico and improve economic growth once the Biden Administration lifts cross-border travel restrictions, the governor said.

However, the UA AZMEX report also reveals the nearly $1.3 billion in fresh produce imports through Arizona’s ports of entry represented a nine percent decrease from the same period in 2020. And that lower supply will likely cause retail food prices to increase across the United States, according to Chamberlain.

Chamberlain noted the company’s new warehouse will help get produce into the United States faster and fresher, but farmers in Mexico are facing a variety of challenges that will boost production costs, something that will be passed along to consumers.

“The drought will curtail planting season and farmers will think twice what they’re able to plant and plant successfully,” Chamberlain explained, adding that higher production expenses for seeds and fuel are also driving up costs for farmers.