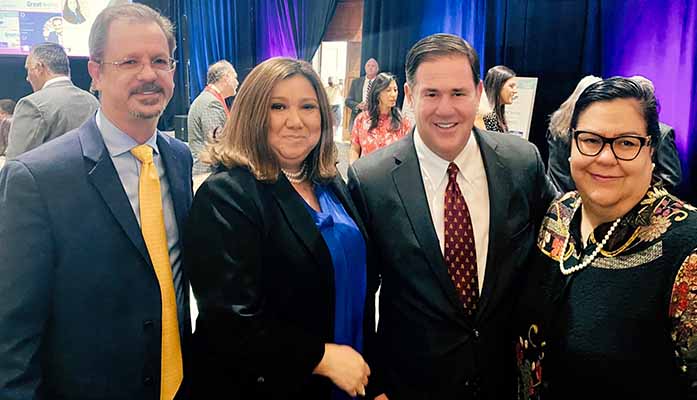 The Arizona Hispanic Chamber of Commerce highlighted the future of housing during an Oct. 29 celebration of the release of 2021 DATOS: The State of Arizona’s Hispanic Market.

The 2021 DATOS report is the most comprehensive compilation of research on the impact of Hispanics on the Arizona marketplace, providing critical insight through demographic, sociographic, and psychographic data. Nearly 43 percent of Phoenix residents identify as Hispanic or Latino, while Hispanics represent almost 32 percent of Arizona’s population.

In addition, Mexicans represent more than 55 percent of the foreign-born population in Arizona, according to the report edited by Monica Villalobos, president and CEO of the Arizona Hispanic Chamber.

This year’s report also delves into Latino contributions and impact in the housing sector. Key housing findings include the fact that 70 percent of new homeowners between 2020 and 2040 will be Latino, and that the Phoenix – Mesa – Scottsdale area ranks in the top 20 markets with the most mortgage-ready Hispanic millennials.

The event, which attracted hundreds of attendees to the Arizona Grand Hotel, was also livestreamed by the Arizona Hispanic Chamber. A panel discussion focused on housing included panelists Amy Schwabenlender of Human Services Campus Inc., Christopher Rodriguez of Ability360, and Gloria Muñoz, chairwoman of the Arizona Housing Coalition.

Among the dozens of subjected addressed in 2021 DATOS is the impact of a bill signed by Ducey earlier this year to allow acceptance of Mexican Consular ID cards in Arizona as of Sept. 29.

Jorge Mendoza Yescas, the Mexican Consul in Phoenix, explained that the consular card does more than provide proof of identity, residency, and Mexican nationality. The card “brings certainty to important economic activities such as opening a bank account, engaging in commercial activities, requesting loans, applying for individual taxpayer ID numbers, using rental services and signing up for utilities,” he noted.

It was also noted that if Hispanics were their own economy, they would be the 8th largest economy in the world.