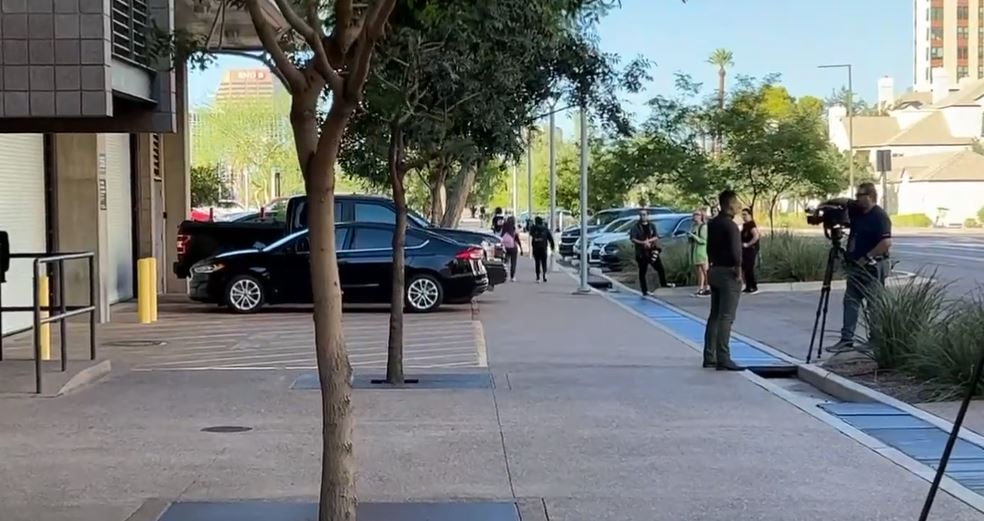 Democratic gubernatorial candidate Katie Hobbs issued unproven claims on Tuesday that Arizona State University (ASU) was required to shutter its campus due to protests and threats of violence incited by her opponent, Kari Lake.

Hobbs accused Lake of inciting death threats and racial slurs against ASU staff, though it appears that the claims originated from one of her campaign staffers. However, no protest occurred and no threats were reported.

According to the Yellow Sheet Report, Walter Cronkite School of Journalism Dean Battinto Batts said that they haven’t received any threats. Batts clarified that his directive for online classes were due to students and staff concerned  about a “potential” for protestors and fellow journalists outside campus buildings.

It appears that the claim of threats and protests originated with Hobbs’ campaign. Last Thursday, an unnamed Hobbs staffer told CNN reporter Kyung Lah that their campaign’s security team met with ASU for Tuesday’s Q&A. According to the staffer, an unnamed, female ASU operator reported intercepting death threats and racist slurs.

“A @katiehobbs staffer tells me Hobbs security met w/ ASU re: security for the town hall next week,” stated Lah. “A rash of death threats have come in since @KariLake’s presser last night and the ASU operator picking up those threatening calls has been called racist slurs (she is Black).”

“I would not be surprised if his ghost rises up tonight with a can of spray paint and go to that school and spray paint out his name,” said Kavanagh. “First they became the story when they violated their agreement with Clean Elections and put their thumb on the elections scale in favor of Katie Hobbs, and now this absolutely ridiculous story that journalism students are threatened and afraid to go to demonstrations.”

After her specially awarded Q&A session with AZPBS, Hobbs went on a Twitter rant lasting nine posts describing her vision for Arizona: increased diversity hires in state government, no limits on abortion, tax cuts for 800,000 families, a teacher salary raise averaging $14,000, border security, and immediate action on the water crisis. Several of her tweets called out Lake, arguing that Lake’s insistence on having a debate was a distraction from her inability to defend her policies.

These other claims made by Hobbs also don’t appear to pan out. Lake has consistently agreed to a debate against Hobbs, and engaged in numerous interviews with a wide range of media outlets.

Lake even invited Hobbs to debate her on Tuesday rather than do back-to-back Q&A sessions. She encouraged AZPBS to restructure their Q&A into a debate for Arizonans’ benefit.