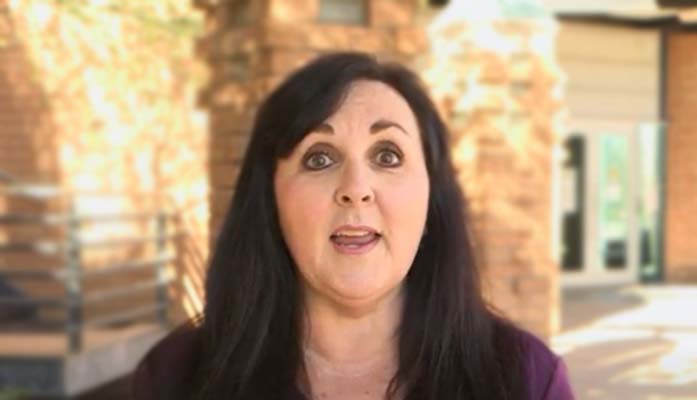 An order last month by Gilbert Mayor Brigette Peterson for town police officers to remove three people from a council meeting has resulted in a notice of claim being served against town officials for First Amendment violations.

A notice of claim is required under Arizona law before a party can initiate a lawsuit against a public entity. On Thursday, such a notice was served on the Gilbert mayor and council members on behalf of Ryan Handelsman, Dr. Brandon Ryff, and Joanne Terry, who contend they were forced out of Sept. 20 town council meeting for engaging in constitutionally protected speech.

According to attorney Tim La Sota, his three clients attended the meeting during which dozens of protest signs were taken into the council chambers. Some of the signs were printed with the phrase “Stop Lying” while others read “Don’t Mesa My Gilbert.”

Peterson interrupted the meeting at one point and ordered a Gilbert police officer to remove a 6-inch by 24-inch “Stop Lying” sign Terry was holding in the back of the room. Terry set the sign down and the officer did not confiscate it.

A short time later, Handelsman addressed the mayor and council during the call to the public to challenge town officials to cite a statute or code being violated by those holding signs. Then Handelsman, Ryff, and Terry each decided to silently hold their signs.

“The Mayor halted the meeting and ordered the police to remove Dr. Ryff, Mr. Handelsman and Ms. Terry from the room. The police escorted them out of the meeting without incident,” according to the notice of claim, which notes the town code does not prohibit signs in the council chambers.

A First Amendment obstruction or retaliation violation could cost the town tens of thousands of dollars in legal fees plus potential damages to each of the three claimants. However, La Sota says his clients will settle for $1, but it will also cost something other than money.

In exchange for a complete release of their claims, the claimants will accept $1 as damages if Peterson and the town of Gilbert issue an official apology, La Sota wrote. In addition, Peterson would have to attend a First Amendment training class.

According to the notice of claim, Handelsman, Ryff, and Terry acknowledge that the government “need not tolerate actual disruptions of government business” and that courts have held that municipalities may enforce “certain free-speech restrictions.”

But those restrictions apply to time, place, and manner of public comment, La Sota noted, and even then courts have ruled such restrictions “must be reasonable, consistently enforced, and fall within constitutional parameters.”

Free speech restrictions by the government are also reviewed to ensure they “are both viewpoint neutral, equally and consistently enforced, as well as narrowly-tailored to meet the needs of the governing body to conduct its business, free of actual disruptions,” La Sota noted.

It is also not allowable to engage in retaliation against someone for asserting their First Amendment rights, which is what the notice of claim alleges Peterson did when she ordered Ryff removed. La Sota points to Ryff’s critical comments about the mayor during his call to the public comments at the prior council meeting.

“Then, at the very next meeting, 50 ‘Stop Lying’ signs show up with essentially the same message,” the notice of claim states, adding that Ryff contends Peterson believed Ryff was responsible for the signs.

“Dr. Ryff’s rights were violated by a vindictive Mayor who seized the opportunity to retaliate against him for years of political opposition and for having filed ethics complaints against her in the past,” the notice of claim states.

The notice of claim further alleges Handelsman, Ryff, and Terry were not being disruptive in how they displayed their signs at the Sept. 20 meeting. It also contends Peterson did not treat all sign-holders the same during that meeting, including an attendee with a visible “Don’t Mesa My Gilbert” sign who was not forced to leave the meeting.

“Certain persons silently holding signs in the back of the room may have been a distraction to the Mayor, but not every distraction is necessarily a disruption and not every disruption is an actual disruption which impedes the ability of the Council to do its business,” La Sota notes, citing a major First Amendment ruling from the Ninth Circuit of the U.S. Court of Appeals (Norse v. City of Santa Cruz, 2010).

Peterson later commented on her actions, arguing she could not read what was written on the signs. Yet that does not explain why his clients were ordered out of the council chambers while others with signs were allowed to remain, La Sota wrote in the notice of claim.

Town officials have 60 days to reject or accept the settlement demand included in the notice of claim.