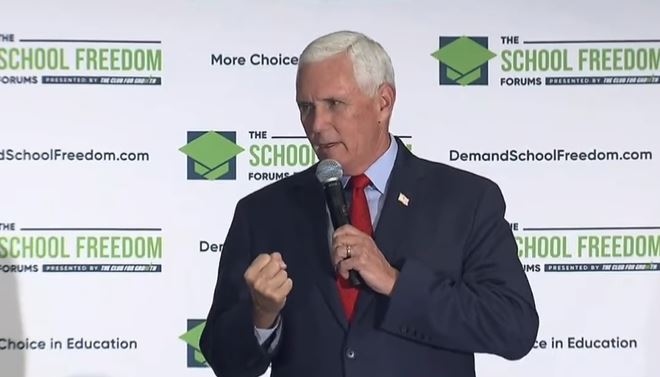 Pence attended a forum hosted by the Club for Growth, a conservative nonprofit based out of Washington, D.C. The forum was the third in their “National Campaign for School Freedom” series. Pence praised Ducey for making universal school choice possible. He predicted that universal school choice would be the standard for all states.

“I don’t think you can overstate or over-commend the leadership of Governor Doug Ducey in creating universal school choice in America for the first time,” said Pence.

Ducey also spoke at the event, explaining that the experiences of parents and students throughout the pandemic accelerated the growth in support for school choice. Ducey stated that it took 8 years to achieve universal school choice. He thanked activists who pushed for school choice expansion, including the Black Mothers Forum and Love Your School founder Jenny Clark.

Ducey compared the refusal of school choice opponents’ refusal to empower families with educational freedom to the refusal of the anti-segregationists in the 1950s.

That explanation by Ducey was backed by data presented by Chris Wilson, CEO of an Oklahoma-based market research agency called WPA Intelligence. Wilson explained that a poll of over 4,000 voters from last July to last August determined that COVID-19 shutdowns changed attitudes on public schools and teachers’ unions.

Wilson explained further that voters had a negative perspective of the phrase “school choice” on its own, but adopted a positive view once a definition of the phrase was provided. He explained that those activists and unions opposed to school choice successfully branded the word “choice” as a negative. Wilson suggested that politicians adjust their presentation and terminology concerning school choice, though cautioned that there was no single “silver bullet” for phrasing.

Wilson added that advancing school choice requires identifying the right opponents and avoiding rhetoric around the wrong ones.

Republican Senate candidate Blake Masters also came to the event. Masters discussed how he and his wife chose homeschooling for their children. Masters derided modern education for prioritizing equity-based curricula like the 1619 Project and Critical Race Theory (CRT).

“That feeling of being in charge of your child’s education, that is a feeling that I wish for every parent in this state and every parent in this country,” stated Masters. “When parents are left free to choose — surprise, surprise — parents will choose reading, and writing, and arithmetic, and history. Guess what they won’t choose? Critical race theory, are you kidding me?”

The forum also featured several testimonies from young adults and their families who benefited from school choice.

Saturday is the deadline to apply for universal school choice through the Empowerment Scholarship Account (ESA) Program.