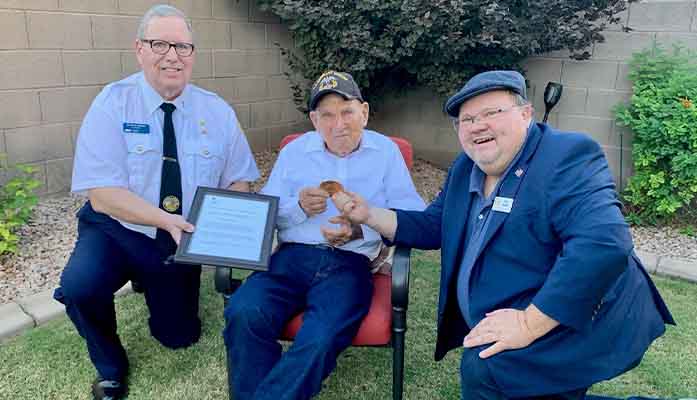 Thomas Freeland, an Arizona World War II veteran, finally received the honors due to him decades ago.

Freeland, a Merchant Marine veteran, received the Congressional Gold Medal late last month. It’s one of the highest honors an individual may receive, accounting for the Presidential Medal of Freedom.

“When it was presented to him, he just teared up and could not speak,” said Huff. “He had his entire family at the event. Huge family, beautiful family.”

The delay came, in part, due to the fact that World War II-era merchant mariners were denied veteran status until 1988.

Although President Franklin D. Roosevelt recognized the bravery and sacrifice of those merchant mariners for undertaking the most “difficult and dangerous transportation job ever undertaken,” they were denied military benefits and other accolades.

While serving as general, President Dwight Eisenhower also commended the work of the merchant mariners.

“[E]very man in this Allied command is quick to express his admiration for the loyalty, courage, and fortitude of the officers and men of the Merchant Marine,” stated Eisenhower. “We count upon their efficiency and their utter devotion to duty as we do our own; they have never failed us.”

It wasn’t until 2020 that Congress passed the Merchant Mariners of World War II Congressional Gold Medal Act, empowering leadership to award those veterans for their service. Over 9,500 merchant mariners lost their lives in that war.

“The feats and accomplishments of the Merchant Marine are deserving of broader public recognition. The United States will be forever grateful and indebted to these merchant mariners for their effective, reliable, and courageous transport of goods and resources in enemy territory throughout theaters of every variety in World War II. The goods and resources transported by the Merchant Marine saved thousands of lives and enabled the Allied Powers to claim victory in World War II. The Congressional Gold Medal would be an appropriate way to shed further light on the service of the merchant mariners in World War II and the instrumental role they played in winning that war. Many students of the Merchant Marine Academy lost their lives as they sailed through enemy-controlled waters or unloaded cargo in overseas combat areas, and, as a result, the United States Merchant Marine Academy is the only institution among the five Federal academies to be authorized to carry a battle standard as part of its color guard.”

Freeland joins two other Arizona veterans who received the Congressional Gold Medal recently. In May, two women from the 6888th Central Post Directory Battalion, or “Six-Triple-Eight” battalion, were awarded the honor for clearing years of backlogged mail, ensuring that loved ones’ letters made it to those serving overseas during World War II.