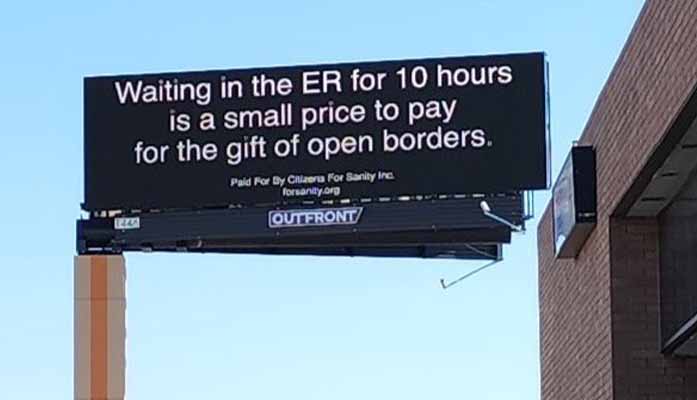 The most recent advertisements in Phoenix highways and newspapers employ satire as commentary on leftist policies. They’re commissioned by a nonprofit group called Citizens For Sanity (CFS), which has flooded similar messaging throughout the Valley and the nation.

“Waiting in the [emergency room] for 10 hours is a small price to pay for the gift of open borders,” reads their latest billboard.

“Drug cartels are trying to run an honest business,” read the ad. “Help them stay profitable by supporting Mark Kelly and keeping our borders wide open.”

According to the CFS website, their mission is to replace “wokeism” and other mindsets it describes as “anti-critical thinking” with common sense, logic, and reason. Their satirical language resembles that of classic 18th-century satirist Jonathan Swift (“Gulliver’s Travels,” “A Modest Proposal”). A more modern comparison may be drawn to The Babylon Bee, a satire news website.

Their other billboards in Phoenix poked fun at criminal justice reform.

“Real progressives support violent criminals in their hour of need,” read another.

One of the key figures behind CFS is Ian Prior, who apprised Fox News of his role with CFS as a strategic consultant. Prior played a central role in the parent mobilization that led to the historic election of a Republican governor in deep-blue Virginia, Glenn Youngkin. He’s also the executive director of Fight For Schools and a senior advisor at America First Legal.

“We cannot stand by as radical woke biology-deniers use young children as guinea pigs for their ideological experiments. Using experimental drugs to stop puberty, injecting opposite-sex hormones, and surgically removing breasts and genitals of young children is insane,” stated Prior.

Prior also shared that CFS targets its messaging toward those most likely to be receptive, such as exposing gender ideology-related messages to the Latino communities rather than to “sheltered rich white coastal leftist elites.” That’s why some of their ads are in Spanish.

In addition to billboards, the group puts out video and radio advertisements. Those aren’t satirical: rather, they’re structured as campaign advertisements.

The group’s efforts nationwide caught the attention of mainstream media shortly after launching their first video about midway last month. Politico reported that the nonprofit relied on “prominent” and “veteran” Republican strategists.