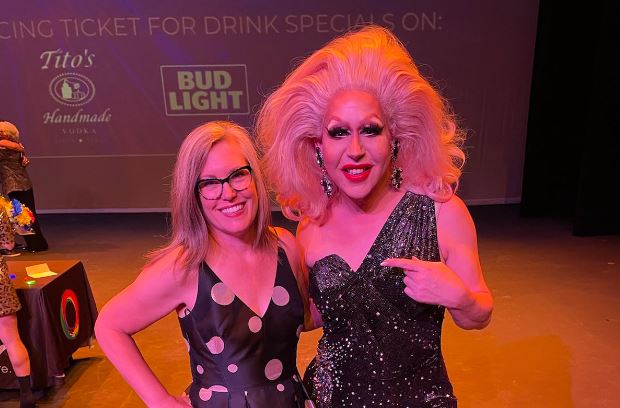 On Sunday, Secretary of State and gubernatorial candidate Katie Hobbs announced that she booked the drag queen who’s spoken out against her opponent, Kari Lake, over their past friendship.

Social media posts by the drag queen, Richard Stevens, went viral in June for showcasing his past friendship with Lake as well as her support and enthusiasm for the drag queen lifestyle.

Stevens spoke out in mid-June after Lake criticized the normalization of drag queens publicly. He called her a hypocrite, claiming that he did a drag queen performance for her birthday with children present years ago, and that she attended his performances at various Phoenix bars.

As proof, Stevens posted photos of Lake standing alongside two drag queens, one of them being him. In one of the photos, Lake was dressed as Elvis Presley and posing alongside Seville dressed as a blonde female with a sugar skull face. It’s unclear whether whether Lake intended to dress as a “drag king,” which is cross-dressing for a woman, or merely intended to wear a costume for a themed party.

“Now that @karilake has waded into the war on drag queens, know she is a complete hypocrite,” wrote Stevens. “Kari was a friend of mine, and I stood by her when she turned to the right. I reached out (and she responded repeatedly) when she took a public drubbing.”

Lake served Stevens a cease-and-desist letter. Incidentally, Stevens was preparing to perform for a “family-friendly” drag show brunch when he received the letter.

“Now Kari is a bully, and the reservoir of goodwill she had built up over the years as a cherished news anchor — well, that’s been drained to the point where we might as well just refer to her now as Kari Puddles,” wrote Ryan.

The Arizona Senate Republican caucus pledged in June to introduce legislation banning child attendance at drag shows. The leaders said that drag shows sexualized and groomed children. They noted that they were working with several other states to draft the legislation.

“If men want to dress as women, and if adults want to participate in watching these hyper-sexualized performances, they have the freedom to do so. It crosses the line when kids are subjected to these drag shows,” wrote the caucus. “We will be damned if we won’t fight like hell to protect the most innocent from these horrifying and disturbing trends that are spreading across the nation now that extremist Democrats are currently in control of our federal government.”

Their announcement followed a series of reports on the controversies following drag shows across the state. In May, a Tucson high school counselor who organized a drag show for students was arrested for having a sexual relationship with a 15-year-old student. In June, a Phoenix museum hosted a drag show open to children.