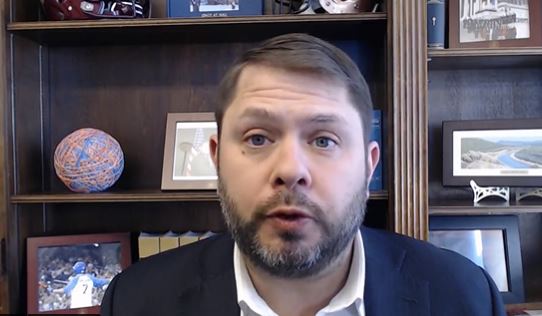 Congressman Ruben Gallego (D-AZ-07) took to Twitter to attack Republican congressional candidate Tanya Wheeless for including her maiden name, Contreras, in her campaign.

Gallego launched his brief attack on Wheeless in response to her jest alluding to First Lady (FLOTUS) Jill Biden’s controversial comparison of Hispanics to breakfast tacos on Monday. Little attention was paid to FLOTUS’ mispronunciation of “bodegas,” a gaffe similar to her mispronunciation of the Spanish phrase “Si Se Puede,” meaning “Yes You Can,” last April.

The congressman retweeted the same tweet from Wheeless three times with different criticisms, calling her race “convenient” and claiming that she “hid” behind her husband’s English surname.

“Glad you are a proud Latina now[,] hope it will stay after you lose,” wrote Gallego. “If you were Latino in Arizona around 2010 people were telling us to go back to Mexico. On the phone you would hear I am not voting for a ‘spic.’ We know people that couldn’t get jobs or leases. Did Tanya use Contreras then… no she hid as Wheeless. We took the arrows for her.”

In response, Wheeless issued a press release countering that Gallego’s attacks were sexist and racist. She explained that changing a last name through marriage doesn’t change an individual’s identity or heritage. Wheeless reaffirmed that she’s proud of her heritage.

“Ruben Gallego’s claim that I am not sufficiently Latina because I don’t always use my full name is disappointing, but not surprising,” wrote Wheeless. “These gross attacks have sadly become too frequent in our political discourse.”

Gallego replied, doubling down on his accusation that Wheeless only used her maiden name to run for office.

Gallego changed his own last name from Marinelarena, his father’s surname, to Gallego in 2008. He decided to change his surname to honor his single mother and distance himself from his father, who he revealed had abandoned his family early on.