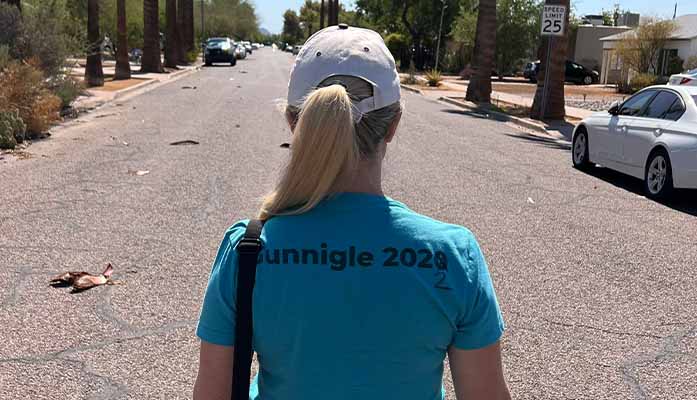 Maricopa County Attorney candidate Julie Gunnigle has campaigned alongside a man and a woman that mocked Blue Alerts: a safety protocol enacted to counter law enforcement murders. The exchange occurred between Planned Parenthood of Arizona (PPAZ) Board Chair Chris Love and gender dysphoric Arizona Democratic Party leader and state legislature candidate Brianna Westbrook. The two tweeted criticism against the safety protocol in response to a Blue Alert for a man ambushed and shot at Arizona Department of Public Safety (AZDPS) troopers in September 2020.

Brian Anderson, founder of the research company Saguaro Group, rediscovered the Twitter exchange between Love and Westbrook. He shared the posts in response to a recent tweet of Gunnigle’s, in which the candidate wrote over a t-shirt from her 2020 run to read “Gunnigle 2022.” Love and Westbrook supported Gunnigle during her 2020 run as well.

“Blue Alerts” are information lines dedicated to communications on violent criminals who pose a threat to law enforcement. The Arizona Department of Public Safety (AZDPS) will issue a Blue Alert when a suspect kills, assaults, or imposes serious or life-threatening injuries on an officer; the suspect is deemed an imminent threat to the public and other officers; and the suspect’s vehicle license plate number or detailed description of the vehicle exists.

Love has consistently called for and celebrated violence against those she dislikes. In May, Love bragged about her husband assaulting a supporter of former President Donald Trump.

Westbrook has approved of controversial protest tactics as well.

In response to the protesters that followed Senator Kyrsten Sinema (D-AZ) into the bathroom last October, Westbrook denounced condemnation against the protesters as the invalid complaints of “white folks.”

Westbrook was also one of a small group of activists protesting for “housing rights” outside Governor Doug Ducey’s home in December 2020.

CORRECTION: A previous version of this story accidentally listed Julie Gunnigle as the Maricopa County Attorney. She is currently a candidate for that office, and the story has been corrected.