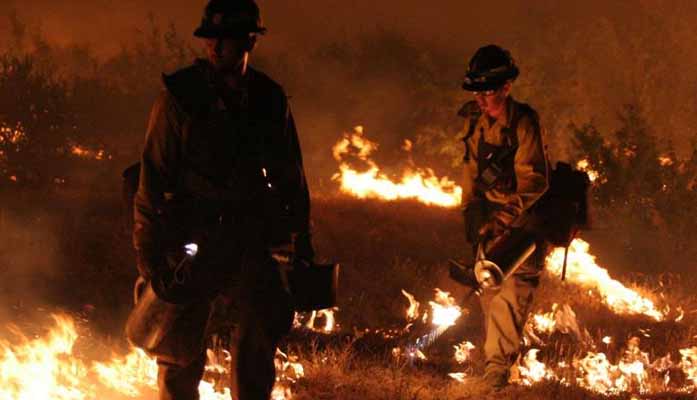 Environmental Reviews May Be Worsening The Wildfire Crisis


Wildfires are burning record numbers of acres each year, with the arid climate and vast areas of federal land making the western United States particularly at risk. But one issue not being talked about enough is whether red tape is getting in the way of fire prevention and mitigation professionals doing their jobs.

The Montana-based Property and Environmental Research Center is raising the alarm about wildfire prevention projects being delayed so long due to the National Environmental Policy Act that mitigation efforts for millions of acres of at-risk lands cannot be undertaken in a timely manner.

And some of those lands are going up in smoke in the meantime, according to a recently released policy brief by PERC senior research fellows Eric Edwards and Sara Sutherland.

According to the brief, more than 10 million acres burned nationwide in three of the past seven years, mostly in western states And in California, nine of the 20 largest wildfires in the state’s history have burned in the past two years.

More than half of the land in the 11 contiguous western states is federally owned and managed,” the brief notes. “While multiple federal agencies must deal with wildfires, the largest burden falls on the U.S. Forest Service. Of the 640 million acres of federal land in the United States, the Forest Service manages 193 million.”

Wildland fire management is the top budget item for the U.S. Forest Service, with suppression costs reaching $1.76 billion in 2020. As a result of the greater severity of fires and the high costs of putting them out, Edwards and Sutherland note that more and more legislators, agency officials, and forest science researchers are concluding that additional proactive fire mitigation activities are needed.

The brief notes that forest managers use two common preemptive fuel treatments  to lessen the intensity of wildfires – prescribed burns and mechanical treatments. Yet despite the fact these approaches have proven effective over the years, U.S. Forest Service has been unable to undertake mitigation activities at a meaningful scale, Edwards and Sutherland found.

The culprit, either intended or unintended, is the National Environmental Policy Act (NEPA) which the U.S. Forest Service must navigate in order to implement fuel treatment projects.

The PERC brief explains that NEPA is a procedural law which requires federal agencies like the U.S. Forest Service to assess the environmental impacts of proposed actions. Projects determined to have no significant impacts receive categorical exclusion from more stringent review, while projects with uncertain impacts require the agency to conduct an environmental assessment.

And for projects deemed to cause “significant environmental impacts,” federal agencies must complete an environmental impact statement (EIS), which Edwards and Sutherland note is “the most stringent type of review under the law.” It can also take more than five years, and sometimes more than seven, from initiation of the assessment to implementation.

Only some of the U.S. Forest Service’s fuel-reduction activities will require an EIS, but such projects require data gathering about expected impacts to the quality of the human environment. The agency must also solicit public comments and respond to all substantive comments.

Completing an EIS is the most time-consuming and resource-intensive of the NEPA assessments, Edwards and Sutherland found is that even the other two types of assessments can significantly increase the time it takes to implement fuel treatments.

“Advocacy groups, firms, and the general public can file objections to NEPA decisions to the Forest Service and, once that avenue is exhausted, can also file lawsuits to overturn decisions or compel additional analysis,” the brief notes. “Although most projects are not litigated, the depth of analysis and time spent on the NEPA process is commonly based on the threat of litigation, as well as the level of public and political interest and defensibility in court.”

Edwards is an Assistant Professor in Agricultural and Resource Economics at North Carolina State University whose research examines environmental and natural resource management institutions across a variety of resources. Sutherland is a lecturer at the Sanford School of Public Policy at Duke University and an environmental economist whose research focuses in part on the political economy of natural resource management, with a focus on fisheries and water management.