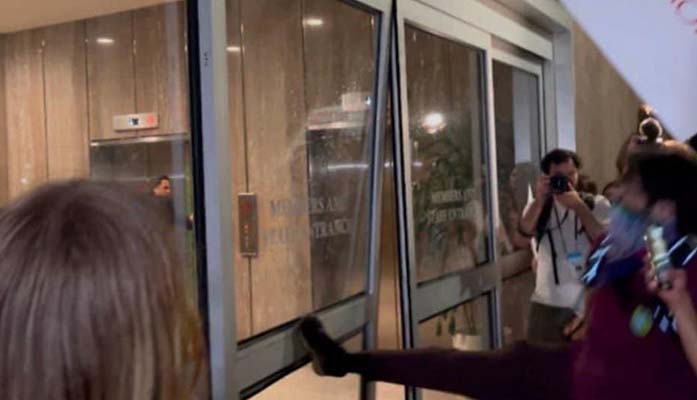 In an interview with “Conservative Circus” host James T. Harris, State Senator Kelly Townsend (R-Mesa) recounted how the senate was in the middle of approving universal school choice when pro-abortion protestors attempted to breach the Arizona Capitol. Townsend said that she and three other legislators retrieved their firearms to help secure the building.

“We got word that there was trouble in paradise, that people were trying to break into the capitol. We knew they were out there, but then they started trying to break into the doors,” said Townsend. “It was just surreal. It wasn’t traumatizing, it wasn’t dramatic. It was just, ‘This is really happening in our capitol.’ It was something that I will never, ever forget.”

Townsend also described the wide range of fellow members’ reactions to the insurrection threat: from those assuming leadership roles to those cowering and experiencing meltdowns. The legislator shared that she encouraged fearful members to take heart, sharing confidence in their safety due to being armed against the rioters.

“That’s the difference between AOC and us — when you’re armed, you are empowered to take care of yourself. You’re not traumatized. You are there to hold down the fort, right?” said Townsend.

The senator recounted that the only individuals traumatized by the event, by her observation, were the two children of a fellow, unnamed senator.

“When you saw who was out there, it was these petulant little 20-year-old girls. There was definitely some Antifa, and that was what caused DPS to act, but mostly it was just girls banging on the window and then coming out with their spray paint and then destroying these monuments with their graffiti — not destroying them but, you know, getting them messy,” said Townsend.

AZDPS reported that rioters committed “felony criminal damage” to the capitol. In their attempts to address the chaos brewing amid trespass and unlawful assembly, AZDPS explained in a press release that they resorted to deploying gas to clear the plaza. In response to criticism of their tactics with children present, AZDPS countered that it was unwise for individuals to bring children to such a protest.

“What began as a peaceful protest evolved into anarchical and criminal actions by masses of splinter groups. As groups realized the state legislature was in session, they attempted to breach the doors of the Arizona Senate and force their way into the building. The violence of their efforts literally shook the building and terrified citizens and lawmakers who occupied the building. As the glass doors bowed from attempts of forced entry, the occupants of the building were instructed to move to secure locations,” reported AZDPS.

Despite the antics of the weekend, Townsend said that she and other legislators showed up early to the capitol to clean up the aftermath of the pro-abortionists. She observed that some Gold Star mothers were outraged by the defacement of the Enduring Freedom Memorial. The rioters wrote “ABORT THE COURT” and “F**K SCOTUS” across multiple memorials.

“If you could put yourself in their shoes and your son’s name is on there, and these petulant children come and spray paint it because they’re not able to take their child’s life?” remarked Townsend.