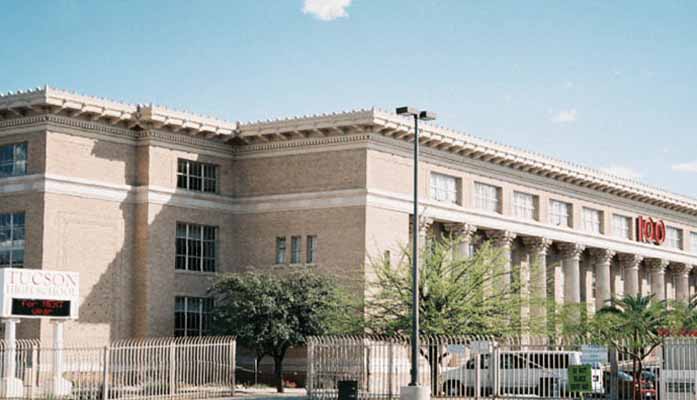 One of the Tucson Unified School District (TUSD) high school counselors that organized a drag show featuring students was arrested last week for having a sexual relationship with a 15-year-old girl. Tucson High Magnet School counselor Zobella Brazil Vinik, a 29-year-old woman, was charged with one count of sexual conduct with a minor.

Vinik worked alongside fellow counselor Sunday Hamilton, a transgender man, to create their first annual drag show. That event was supposed to take place on May 7 — two days after TUSD put Vinik on administrative leave and launched an investigation into her, and four days before Vinik turned herself in to police.

Vinik’s ex-wife initially informed police that she and Vinik allowed the 15-year-old victim to live at their residence. According to the police report obtained by KVOA, the ex-wife discovered Vinik’s underwear under the pillow of where the minor slept. Further police searches of phone records uncovered intimate conversations between Vinik and the minor.

On May 4th, 2022, detectives from the Tucson Police Department Sexual Assault Unit informed the administration of Tucson High Magnet School of an ongoing investigation into one of its counselors, Zobella Brazil Vinik. The administration was informed of an alleged inappropriate relationship between the counselor and a 15-year-old student from Tucson High.

Working with the Tucson High administration, the District administration acted swiftly to remove the counselor from campus and place her on administrative leave. Our School Safety Department immediately initiated a comprehensive investigation into this alleged incident, which is currently ongoing.

On Thursday May 5th, 2022, Ms. Vinik resigned her position from the Tucson Unified School District and is no longer an employee of the district. The Tucson Unified School District administration will continue to cooperate with the Tucson Police Department in its ongoing investigation. Our administration will continue to emphasize the health and safety of our students as our highest priority.

The social media account created for the high school’s inaugural drag show, @tucsonhigh_drag, posted an eight-day countdown featuring some of the students that would be participating. The event also featured adults that would be performing alongside students: local performers under the stage names, “Erotica Powers,” “Onika Grande,” and “Sophia G. Lauren.”

It appears the drag show did occur. The event hashtag, #thmsdragshow22, was used by at least one of the minor participants who posted pictures related to their attendance. According to an email from Vinik, the drag show occurred on school grounds and received help from other teachers and organizations such as the University of Arizona’s (UArizona) Institute for LGBTQ Studies and the Southern Arizona Aids Foundation.