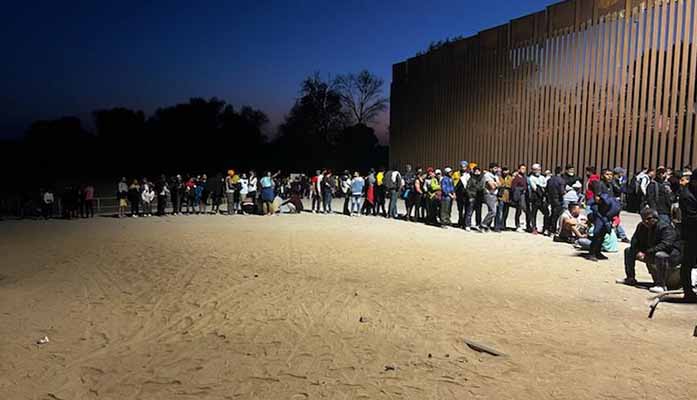 On Wednesday, the entire Republican caucus of the House submitted a legislative proclamation on the floor denouncing the current state of the border under President Joe Biden.

State Representative Gail Griffin (R-Hereford) sponsored the legislation. All 31 Republicans signed onto it.

The GOP proclamation cited the fact that 1.7 million illegal immigrants accounted for a nearly 380 percent increase in border crossings compared to the previous fiscal year. It also noted the spike in drug trafficking: 10,000 pounds of fentanyl, 180,000 pounds of methamphetamine, 86,000 pounds of cocaine, 5,000 pounds of heroin, and 311,000 pounds of marijuana. That’s in conjunction with thousands of violent crimes committed.

The proclamation also touched on a newer trend: cartels recruiting teenagers via social media to be human smugglers for about $1,500 to $2,000 per illegal immigrant, nicknaming the vehicles “load cars” and the teens “load-car drivers.”

The proclamation is reproduced below, in full:

Whereas, the United States-Mexico border consists of 1,954 miles of varied terrain, including deserts, rugged mountainous areas, forests and coastal areas; and

Whereas, officially established in 1924 by an act of Congress in response to increasing illegal immigration, the United States Border Patrol has primary responsibility for securing the border between ports of entry; and Whereas, Border Patrol agents patrol international land borders and waterways to detect and prevent the illegal trafficking of people, narcotics and contraband into the United States; and

Whereas, on March 7, 2022, the Western States Sheriffs’ Association unanimously passed Resolution 22-1, which outlines the alarming issues facing our nation due to the unchecked illegal immigration crises at our southern border; and

Whereas, the southern border of the United States is currently experiencing an unprecedented number of people attempting to enter the country illegally, with the past fiscal year seeing a 379% increase of border encounters as compared to the previous fiscal year. These 1.7 million individuals represent 164 countries, including countries with suspected terrorist ties, and 63% of them are from countries other than Mexico; and

Whereas, there has likewise been a major increase in apprehensions, expulsions and “getaways” on the southwest border, with one million encounters and 300,000 getaways between October 1, 2021, and April 11, 2022; and

Whereas, in the past fiscal year, the number of illegal drugs seized has skyrocketed, including 10,000 pounds of fentanyl, 180,000 pounds of methamphetamine, 86,000 pounds of cocaine, 5,000 pounds of heroin and 311,000 pounds of marijuana. Likewise, criminal activity has soared, with law enforcement documenting 60 homicides, 1,178 assaults, 2,138 drug-related or drug trafficking arrests, 825 burglaries, 1,629 DUIs, 336 weapons arrests and 488 sexual assaults; and

Whereas, in a new effort to boost their operations, criminal cartels are using social media platforms as a recruiting tool for human smuggling. Drivers are lured by social media posts promising payment of $1,500 to $2,000 for every migrant a person can transport by vehicle to Tucson or Phoenix. Known as “load-car drivers,” these individuals are mainly young people, some as young as fourteen years old, who are enticed to pick up undocumented migrants at the border and ferry them to their destinations in exchange for money. Arizona Governor Doug Ducey has called on four social media giants to better monitor their platforms and ban these recruitment posts on their sites; and

Whereas, for individuals who are smuggled into the United States by Mexican and South American cartels, their arrival marks the beginning of years of drug distribution, modern-day slavery and sex trafficking to pay back the criminal cartels to which they are indebted; and

Whereas, an estimated 8% of the 1.7 million encounters last fiscal year were unaccompanied minors; and

Whereas, tragically, the prior year saw 162 migrant deaths in Southern Arizona; and

Whereas, an uncontrolled border is a security and humanitarian crisis, and the increased violence and the smuggling of illegal drugs, weapons and human beings poses a direct threat to our communities and innocent Americans; and

Whereas, the current administration has halted construction of a southern border wall, and there are numerous unfinished sections in Arizona; and

Whereas, this administration is not working collaboratively or in good faith with local law enforcement agencies and other state leaders to address the serious issues related to the border; and

Whereas, in April 2021, Arizona Governor Doug Ducey declared a state of emergency at Arizona’s southern border; and

Whereas, in February 2022, Arizona Attorney General Mark Brnovich issued a legal opinion determining that the current crisis at Arizona’s southern border with the violence and lawlessness of cartels and gangs legally qualifies as an “invasion” under the United States Constitution.

Therefore, Representative Gail Griffin and the following members of the House of Representatives of the State of Arizona denounce the continued breach of our nation’s southern border and support safe communities, immediate, decisive action to secure the border and alleviate the security and humanitarian crises associated with illegal immigration.