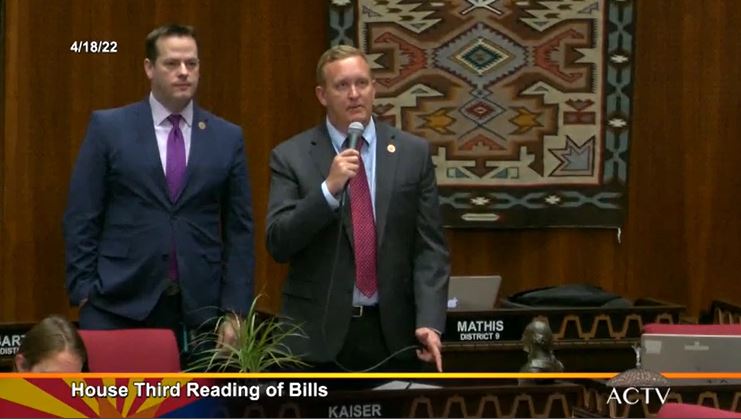 SB1211, which would require schools to publish curriculum lists on their websites, failed in the House 28-30 on Monday.

The votes weren’t panning out in the way Republicans hoped, so several legislators voted to kill the bill in order to salvage it for later discussions. State Representatives Joel John (R-Buckeye), Steve Kaiser (R-Phoenix), and Justin Wilmeth (R-Phoenix) voted with Democrats to kill the bill. Kaiser explained during the floor vote that he and Wilmeth did so in order to keep it active and open for discussion.

John, however, argued as a former teacher that the bill was too much of a burden for educators. He characterized the transparency bill as an “unfunded mandate” foisted on those in a “low-paying, thankless job.” John issued the false claim that he was only one of two other educators in the House. Other past and present educators include State Representatives Neal Carter (R-Queen Creek), Shawnna Bolick (R-Phoenix), Michelle Udall (R-Mesa), and Jennifer Pawlik (D-Chandler).

“The laws are quite robust already. I think this bill frankly goes too far and puts too many extra burdens [on teachers], as some of our colleagues have already pointed out,” said John.

“The reason we need to have a bill about this is because there’s problems happening in schools across Arizona,” said Kaiser. “If you don’t think this is a problem, look at the board [of votes]. This is a direct reflection of what’s happening to parents in schools. ‘There’s not a problem,’ they say. ‘Go home,’ they say. ‘We gave you a thumbnail sketch of what we’re talking about, go home.’ I’m so disappointed in how these votes are turning out.”

Apart from John, teacher perspectives on the bill differed along party lines.

Udall, a current teacher, supported the bill. She suggested that additional funding should be established to help ease the additional burdens of the bill. Udall noted the importance of proactive forms of transparency, rather than retroactive.

Conversely, Pawlik, also a teacher, asserted that educators shouldn’t have to be concerned about posting last-minute tweaks to curriculum or learning materials. Pawlik argued that it would not only inhibit teachers’ flexibility, but ultimately stunt students’ education.

SB1211 would enable parents access to all curriculum, learning materials, and teacher training at their school, organized by subject, grade, and teacher. Democratic legislators argued that parents should switch schools if they weren’t happy with the transparency at their current schools. They contended further that the legislation would create more red tape and punishment for educators. One legislator went so far as to argue that the bill constituted an effort to control speech.

If the Republican representatives hold to their promise, SB1211 may be resurrected this session in one form or another. As of press time, no exact solution was made apparent.