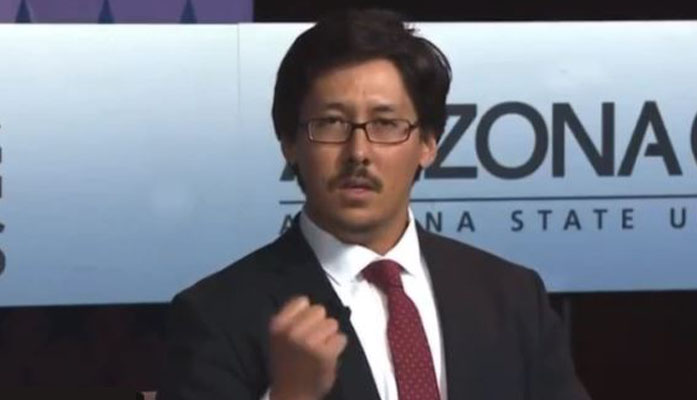 The Republican congressional candidate linked to QAnon’s origins claimed during a debate on Wednesday that the Keystone Pipeline caused Russia to invade Ukraine. The candidate, Ron Watkins, became famous for his controversial online persona offering 2020 election fraud claims and commentary.

“We wouldn’t even be in Ukraine if President Biden did not shut down the Keystone Pipeline on the first day. Because now that that’s shut down, we have to get our oil, and we’re getting our oil from Russia and we’re getting all these problems through the Ukraine and that would not have happened if Biden didn’t shut down the pipeline,” said Watkins. “We’ve got all of this oil coming from Russia to the United States and they wanted a better route to bring the oil through.”

In response, Blackman criticized Watkins for daring to run for the U.S. Congress with ignorance of the major geopolitical conflict in Ukraine. He then offered Watkins a summarized lesson on the ongoing war.

“You’re trying to work on a national stage and you don’t even know why the war started in Ukraine? It had nothing to do with the Keystone Pipeline. The Keystone Pipeline caused the inflation and the increase in our gas prices,” explained Blackman. “The reason why I went into Ukraine is because Russia wanted Ukraine as they had them pre-World War II and Ukraine wanted to be part of NATO.”

“He’s right. I made a mistake,” responded Watkins.