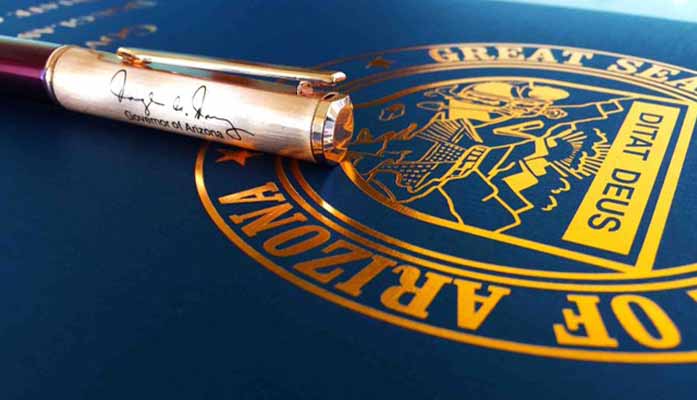 Gov. Doug Ducey had a productive Friday, signing 19 bills that will take effect later this year, including legislation which makes adoption hearings more accessible and ensures more thorough vetting of those working at nursing homes.

One of the bills signed by Ducey is Senate Bill 1242 which made it to the governor’s office with strong bipartisan support to enhance background checks for those working at and managing by nursing care and assisted living facilities. The bill, sponsored by Sen. Tyler Pace, also prohibits licensure of individuals who have a felony conviction involving acts of violence or financial fraud.

“Our nursing homes and assisted living facilities deserve accountability and leadership from their supervisors,” Ducey said Friday. “SB 1242 accomplishes this. Our seniors – grandmothers, grandfathers and family members – deserve nothing less to ensure their safety, happiness and health.”

Another provision of Pace’s bill requires the Arizona Board of Nursing Care Institution Administrators and Assisted Living Facility Managers (NCIA) to work with the Arizona Department of Health Services to establish an expedited process for identifying and referring complaints between the agencies.

Five of the 19 bills signed by Ducey on Friday were sponsored by Sen. TJ Shope. They cover a variety of issues, including liens, healthcare directives, tribal college enrollment, postsecondary education, and one which reduces the time period that a nonprofit organization must be in continuous existence prior to conducting a raffle down from five years to one year.

Sen. Nancy Barto sponsored four of the signed bills, including Senate Bill 1069 which allows adoptive families to invite members of the public to adoption hearings. Under current law, only persons with a “direct interest” in an adoption case could gain access to such hearings.

Municipalities will gain new authority when one of the 19 bills goes into effect 90 days after the current legislative session ends. That authority is courtesy of Senate Bill 1275, one of three bills signed by Ducey which were sponsored by Sen. J.D. Mesnard.

SB1275 allows local governments to reduce noise disturbances by limiting fireworks between 11 p.m. and 8 a.m., except for New Year’s Eve and Independence Day. On those two national holidays, the setting off of fireworks could be banned after 1 a.m.

The bills signed by the Governor on Friday are: