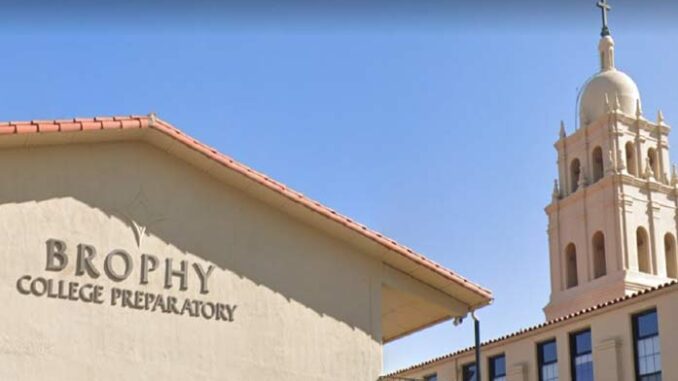 Earlier this month, Brophy College Preparatory School engaged in a 10-day-long social justice campaign for its annual Summit on Human Dignity. Although the 40 Days for Life campaign began March 2 and will last until April 10 this year, the school didn’t include pro-life or abortion conversations in any of its workshops that day or in any other part of the summit. The school also didn’t engage in other prevailing social issues at conflict with the Bible, such as homosexuality, transgenderism, premarital sex, divorce, COVID-19 vaccination, women in church leadership, and parental rights. The summit also occurred during Lent, a religious observance for some denominations who claim Christianity to commemorate Jesus Christ’s 40 days of temptation by Satan in the desert following his baptism. Nowhere on the summit webpage did the school mention the observance.

The summit theme was, “Phoenix: Born of Ashes,” with eight tracks: “Environment and Sustainability,” focusing on water use and scarcity, heat island effect, and unsustainability of a desert metropolis; “Land Use,” focusing on rising costs and housing bubbles, gentrification, and legacies of redlining; “Indigenous Rights,” focusing on land acknowledgement and restorative justice, legacy of the Phoenix Indian School, and disparities on and off the reservation; “Migration,” focusing on border policies between the U.S. and Mexico, undocumented [sic: illegal immigrant] neighbors, domestic transplants and a first-generation city; “Politics,” focusing on statehouse polarization, shifting politicial demographics, and Phoenix’s rising national prominence; “Education,” focusing on how Arizona is second-to-last among states in educational outcomes, racial disparities in education quality, and education funding issues; “Police and Incarceration,” focusing on the Department of Justice probe and incarceration rate disparities; and “Unhoused in the Heat,” focusing on unique drivers and risks in Phoenix, effects of recession and the housing bubble, and potential forces for change.

Laced throughout these tracks was the prevailing issue of race and alleged racism, and each track included keynote speakers not directly involved in the issue at hand but with plenty of commentary to offer — mainstream media reporters, activists, and academics — with the exception of those presenting in the Indigenous Rights track.

The promotional video for the summit mocked the city’s Civil War-era founders in a revisionist historical skit, stuffing all of the summit’s topics into 10 minutes of footage: systemic racism, Native American rights, water conservation, public education, and illegal immigration. Despite characterizing one of the founders, ex-Confederate soldier-turned-Army dispatch rider Jack Swilling, as dismissive of Native Americans, the skit didn’t mention Swilling caring for two Apache children as his own. The photograph the school used to identify Swilling was a doctored version of an original depicting Swilling with an Apache Indian boy identified by historians as his adopted son, Guillermo “Gavílan” Swilling — though it’s disputed if he and the other child, a girl, were ever formally adopted due to laws at the time on adoption of Native American children. The version used by Brophy was one that erased the boy from the photograph entirely, created 15 years later.

The two students in the skit characterized the city as “completely unsustainable and deeply problematic on a number of ethical levels.”

The four questions the summit proposed were urges to the participants to focus on the social justice issues presented in each track.

On one day committed to workshops, the school offered 29 different lectures or presentations, out of which only four weren’t apparently centered on social justice. The remainder of the workshops focused on the rights, issues, or controversies with: Native Americans, policing, environmentalism, homelessness, illegal immigrants, Black Lives Matter (BLM), prisons, and race.

One workshop focused on God specifically: “Heaven on Earth: Strengthening Our Relationship with God.” However, another focused on affirming the validity of other world religions: “An Interfaith Look at Phoenix,” by the Brophy Interfaith Coalition.

Over the past 18 years, Brophy has progressively committed its annual summits to various social justice causes with interludes of neutral topics. Last year, the summit was “Challenging Racism.”