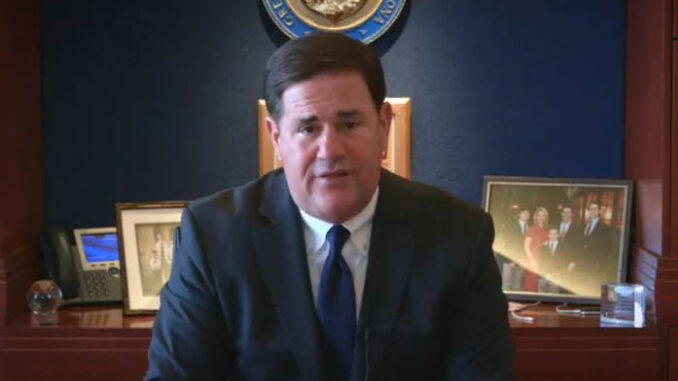 Both chambers of the Arizona Legislature have been busy this week considering bills which originated in the other chamber, and one that is garnering a lot of attention would clarify and curtail the emergency powers of the governor.

Senate Bill 1009 was introduced in January by Sen. Michele Ugenti-Rita to ensure state lawmakers have a voice in how the state responds to public health emergencies. The bill easily cleared the Senate and was transmitted to the House on Feb. 2.

On Thursday, SB1009 cleared the House Government & Elections Committee and is awaiting a Third Reading.

Supporters of SB1009 note Arizona has been under a COVID-19 public health state of emergency since March 2020. During time, Gov. Doug Ducey has issued nearly two dozen executive orders but the Arizona Legislature has been essentially kept on the sidelines throughout.

The bill by Ugenti-Rita (R-LD23) would establish a 30-day cap on a Governor’s initial proclamation with respect to a public health emergency. A Governor could extend the state of emergency in 30-day increments for up to 120 days total.

After that point, a public health emergency proclamation would terminate unless extended by the Arizona Legislature through passage of a concurrent resolution. Any legislative extension would also be effective for 30 days but could be approved “as many times as necessary.”

SB1009 also prohibits a Governor from proclaiming a new state of emergency based on the same conditions unless the Legislature consents via a concurrent resolution. Another provision of the bill would kick in if a Governor extends the public health emergency beyond the first 30 days.

It requires a written report be submitted to a joint committee of the Senate and House health committees. The joint committee would then be responsible for providing “a favorable or unfavorable review” of the extension after being briefed by the Governor’s Office and the director of the Arizona Department of Health Services.

SB1009 is similar to a provision Ugenti-Rita introduced last year into one of the annual budget bills. The bill was later voided by the Arizona Supreme Court for technical reasons.

If signed into law, the change in a Governor’s powers would take effect in January 2023.