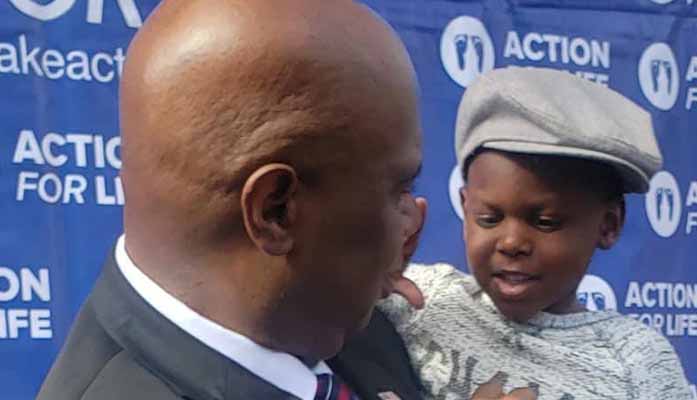 In honor of Black History Month, State Representative and congressional candidate Walt Blackman (R-Snowflake) introduced a proclamation, HR2001, to assert that abortion was the leading cause of death for African Americans and that unborn African-American children have equal rights under the Constitution. Blackman asked for a moment of silence to honor the approximately 1,300 unborn African-American children whose lives would be lost to abortion that day, based on statistical rates of abortion.

The legislator also asserted that Planned Parenthood Founder Margaret Sanger and its major supporters, like Hillary Clinton, are the “real racist[s]” and that abortion is “racial genocide.”

State Representative Pam Powers Hannley (D-Tucson) issued an immediate response to the proclamation, noting that Blackman’s approach to Black History Month with an “anti-abortion manifesto” was “a little bit weird.” Blackman is a black legislator.

Powers Hannley claimed that Blackman wasn’t only blaming Planned Parenthood but the mothers of those aborted children. Powers Hannley further argued that the greater focus should be on the fathers, as well as encouraging citizens to make smarter choices concerning their sexual habits such as wearing protection or choosing their partners more wisely.

Powers Hannley then concluded with an argument that struck similar tones to those who advocate for abstinence, taking the bodily autonomy logic and applying it to abstaining from sex with certain partners or in certain situations.

“I thought that Blackman’s speech was insulting to women. Women have a choice over their bodies. I think they should make better choices, perhaps, with who they have sex with. And that goes for women of all ages, and all races, and all ethnicities,” said Powers Hannley. “If that guy is not to be there for you if you get pregnant, don’t have unprotected sex with him — come on! And guys, if you want to prevent abortions, wear a freaking condom. You have control over this. You can control it at the first step, rather than trying to regulate women’s bodies later.”

The full text of the resolution is reproduced below: