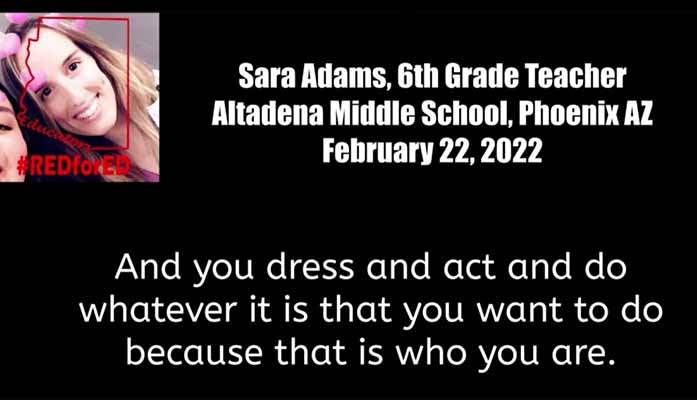 Altadeña Middle School 6th grade English Language Arts (ELA) teacher Sara Adams was recorded teaching her students about gender identity and not trusting their parents on the subject. Adams said to her students that those who tell them otherwise, like their parents or other family members, are part of the “older generations,” intimating that their elders’ teachings of right and wrong concerning gender were a “hard line.”

“So, now keep in mind that our society has changed somewhat in ways for the better, okay? No longer for most people is that a hard-drawn line,” said Adams. “Ok? That line gets blurred. There are still people in our society, the older generations, who, that’s the hard line. That’s how they grew up. That’s their mentality. You don’t cross that line. You are a boy, you are a girl, those are your roles, you know what you are supposed to do.”

“But as your generations [are] coming around and the generations that are gonna come after you. We are hoping that that line completely disappears. And there is no line. And you are free to be whoever it is who you want to be. And you dress and act and do whatever it is that you want to do because that is who you are,” said Adams. “Sometimes it’s a hard line for some. Sometimes it’s a faint line. Sometimes you can see the line’s been blurred and then someone comes and redraws it. That’s where we’re still at.”

Adams asked her students about society’s standards for boys’ preferences and behaviors. Children in the class respond that boys can’t wear dresses, play with dolls, or “be pretty,” and that they were expected to only play sports. Adams insinuated to the children that their parents’ teachings on right or wrong concerning gender were inaccurate.

“What else boys aren’t you supposed to do? And it might be that you heard this from family members,” said Adams.

Adams expanded on one student’s notion that boys can’t “be pretty” by saying that meant boys couldn’t wear makeup, style their hair, or wear nails. When a student asked why a boy would do those things, Adams replied that certain people desired them and added quickly that boys shouldn’t.

“Because some people like that. It’s who they are. But boys aren’t supposed to do that,” said Adams.

“Don’t show your feelings. That’s a girl thing. Aw, you little sissy! Isn’t that all you’ve heard before as boys? Don’t cry! There’s no crying, you’re a boy!” said Adams.

Adams and her fellow teachers in Kyrene School District (KSD) appear to have shaped the students to be in agreement with their teachings already. Several of Adams’ middle school students came to the teacher’s defense on social media, both of whom put gender identity descriptions in their bios. Both students admitted that the incident didn’t occur during their class period.

“This is my ELA teacher. She was responding directly to the curriculum and explaining to the class (not my period) how people view the kid in this book and how things were viewed at the time. That’s exactly why [in] this recording she said that your grandparents have probably told you this,” wrote the user. “This is so dumb that you guys jump straight to assuming, this is a middle school kid recording this, you have no clue what they are trying to do??!! Ms. Adams is an amazing teacher and I know MANY people could support this. I can’t believe somebody would do this.”

Another user who identifies as “she/her,” @Lauren_NotEmo, agreed that the point of the assignment was to discuss gender identity issues.

“Hi I’m Lauren and Mrs Adams is also my teacher. She was talking about this in class and this was about the book that we were learning in class,” wrote the other user. “I think this is ridiculous and not called for but this was not my period also when this happened.”

It also appears that Adams’ district would be on board with her use of class time. KSD submitted a “Visioning Survey” to parents concerning diversity, equity, and inclusion (DEI), culture, Culturally Responsive Teaching (CRT), and Social Emotional Learning (SEL). As AZ Free News has reported, SEL and this version of CRT maintain congruous teachings with Critical Race Theory.