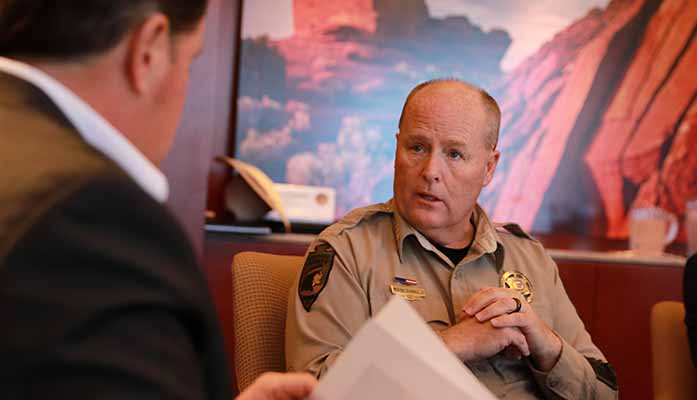 Arizona Gov. Doug Ducey and the majority of Arizona’s sheriffs are tired of waiting for Congress to do something constructive about the unsecured Arizona / Mexico border.  So they are joining together to support draft federal legislation which would bolster border security, along what the governor has described as “a patchwork of federal, state, tribal and private lands.”

On Tuesday, 11 of Arizona’s 15 sheriffs took part in the meeting with Ducey to discuss the overwhelming problem of human trafficking and illegal drugs coming across the 372-mile border. After the meeting, the sheriffs in attendance voted to advocate for the legislation drafted by Ducey’s staff in hopes of persuading Sen. Mark Kelly and Sen. Kyrsten Sinema to get on board.

Ducey’s meeting with the sheriffs came one day after his State of the State address to the Arizona Legislature.

“In Arizona, we will secure our border. We will protect public safety. We will not back down,” Ducey said in his speech. “We will fight this fight until Washington, D.C. finally acts.”

The governor used his State of the State address to highlight his commitment to a multifaceted, coordinated border security effort.

“No member of the Arizona congressional delegation that actually cares about the safety of our communities should vote ‘yes’ on any legislation until the president agrees to language that does the following: secures our border with a wall, a physical barrier and virtual surveillance; increases resources to the local communities that have been devastated by these dangerous open border policies; and makes it clear that our border is not open to illegal immigration,” Ducey said Monday before going on to call out Kelly and Sinema by name.

“In short, we shared our frustration with the lack of shared action plans and no-end being in sight,” Dannels told AZ Free News of the Dec. 28 meeting. “I asked what this administration’s end-game was. I received no answer.”

“I asked Commissioner Magnus to provide supportive leadership to these officers and agents during this crisis,” Dannels said.