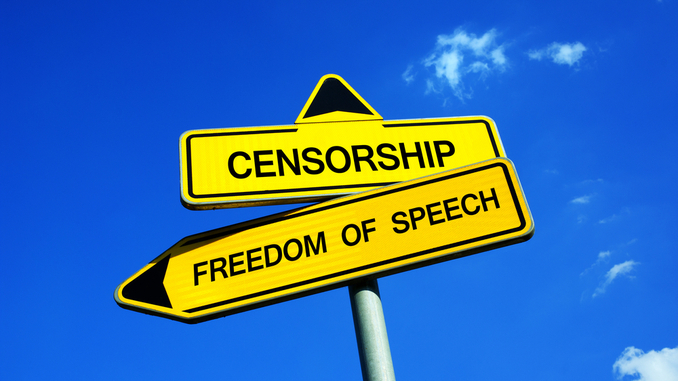 The controversy over COVID management is not a medical disagreement but a political fight. It’s also a free speech issue, the question of whether those who disagree with the political/medical status-quo should be silenced.

Although we have learned more over time about the origins and development of COVID, there is no question it is a contagious virus that spreads primarily through respiratory secretions.

Infections range from symptom-free to fatal, but serious disease and death occur almost exclusively in the infirm and the elderly. Like all viruses, the coronavirus mutates, apparently into variants that are more contagious but less deadly.

So far so good. The disagreement is over its containment. Americans have become a risk-averse people, where nonsensical catch phrases like “if it only saves one life” and “in an abundance of caution” have supplanted sober cost/benefit analysis.

So, our government’s go-to solution for the pandemic was lockdowns for everyone. Commercial, social, educational, and other personal interactions were halted to stop the spread of the disease.

The results of this massive experiment in public health were disappointing. 800,000 Americans have perished. There may have been some benefit to “flattening the curve”—spacing out illnesses to avoid overwhelming healthcare facilities—but the total number of fatalities was not much affected.

Meanwhile the cost of the lockdowns was enormous. The federal government spent $6 trillion in COVID relief, much of it wasted or misappropriated. Moreover, virtually all of the handouts were debt financed, pleasing current taxpayers/voters but assuring that Americans will be struggling financially far into the future.

The collateral damage included over 90,000 “excess deaths” due to forced shutdowns of routine preventive and diagnostic care. There were sharp spikes in levels of depression, substance abuse, and overdose deaths, especially among the young.

The Great Barrington Declaration (GBD) in October 2020 was based on addressing these “grave concerns about the damaging physical and mental health impacts of the prevailing COVID-19 policies.” It recommended an alternative approach called Focused Protection.

The authors were respected physicians from Harvard, Oxford, and Stanford with 91,000 additional professional endorsements, including from a Nobel prize winner. Their paper noted that vulnerability to death from COVID-19 was over 1,000 times higher in vulnerable populations than among young people. For children, COVID-19 is less dangerous than many other harms, including influenza.

Thus, it made sense to protect vulnerable populations if anything more vigorously, while reopening schools, businesses, and restaurants with reasonable precautions. Both overall mortality and social harm could be protected until we reached herd immunity.

In a society based on reason and open inquiry, this proposal would at least have received serious consideration. Instead, the Trump-hating media erupted in withering denunciations and cancellations.

Worse, recently obtained emails reveal that our “follow the science” authorities intentionally thwarted the dissenting viewpoint. Then-director of the NIH Francis Collins wrote Anthony (“I am the Science”) Fauci that GBD seemed to be getting some attention. “There needs to be a quick and devastating takedown of its premises. Is it underway?”

Fauci answered in the affirmative. Soon after, he informed The Washington Post that GBD was a fringe operation. “This is not mainstream science. It’s dangerous.”

Several media outlets ran with criticisms by Fauci, who completed the cycle by citing their articles in his talking points. Facebook pitched in by censoring any references to GBD. It was the dreaded “misinformation.”

Focused Protection never got traction. But shutting down open dissent in favor of political agendas has produced tragic consequences. In spite of Fauci’s claim in October 2020 that the draconian remedies were temporary, when caseloads rose the next month, shutdowns were resumed.

Let’s be smarter with omicron. Let’s vaccinate and medicate, protect the vulnerable but avoid panic and unnecessary disruptions in our lives.

The Great Barrington Declaration, the responses, and consequences are a reminder of the practical importance of free speech rights. Better decisions are made when all sides are heard out.