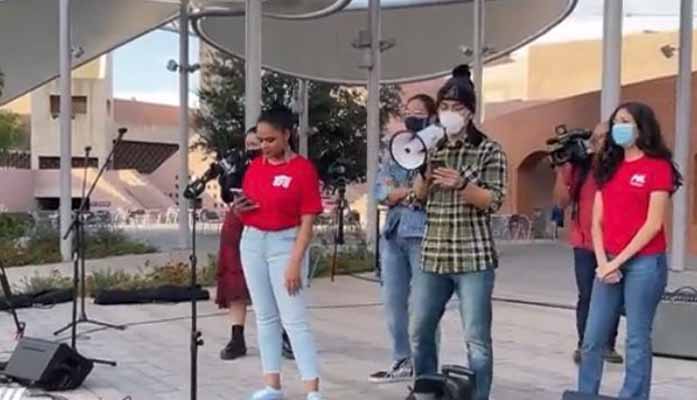 “Kyle Rittenhouse didn’t get a guilty verdict because he was f*****g white!”

As punishment, Qureshi received a stern warning for the multicultural center incident. In an interview with ASU’s newspaper, State Press, Qureshi revealed that ASU also required her to write a reflection paper on how to “facilitate civil dialogue.”

That mandated reflection apparently had no bearing on Qureshi’s remarks during Wednesday’s protest. Like the other protestors, Qureshi repeated that “killer Kyle” must be barred from campus. Rittenhouse was acquitted of all murder and reckless endangerment charges last month after days of jury deliberation. One of the investigative reporters who testified at the Rittenhouse trial, Drew Hernandez, documented the ASU Rittenhouse protest and Qureshi’s speech.

“And that is exactly what whiteness and masculinity looks like,” responded Qureshi.

Not only did the four student organizations protest against Rittenhouse’s potential enrollment at ASU, they demanded that the university fund some of their other initiatives.

Several of the initiatives were those that Qureshi was deeply involved in. One of them was a hub where victims of domestic and sexual abuse could receive help that Qureshi advocated for last year as the co-president of the campus’ Women’s Coalition, called a Campus Assault Advocacy, Resources & Education (CAARE) Center.

As AZ Free News reported earlier this week, the student organizations didn’t answer why they would demand funds for a rape crisis center when Joseph Rosenbaum was a convicted child molestor and Anthony Huber was a convicted domestic abuser.

The student organizations also demanded that ASU fund the multicultural center also advocated for by Qureshi through the MSC, where she and two other female students harassed two white male peers for “racist” messaging like a “Police Lives Matter” sticker. Neither ASU or the student organizations clarified the current status of the center’s funding when AZ Free News asked.