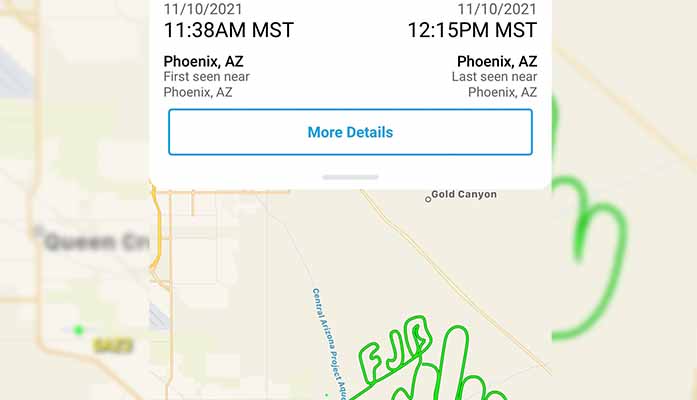 A private plane in Phoenix went viral after its flight path drew “FJB,” the acronym for “F**k Joe Biden,” alongside a middle finger. The flight occurred on Wednesday and took just over half an hour and nearly 30 miles to complete, according to the travel log. The website that tracks these types of flights has a replay option to show how the pilot completed the drawing.

The pilot behind this artistic expression of flying skill was Dennis J. Vegh, or DJ Vegh, the co-founder of AerialSphere, an acclaimed, innovative company that’s the first and only to provide 360-degree aerial imagery with location data. In a statement to AZ Free News, Vegh expressed how much he enjoyed being creative while flying.

“I enjoy making flight art every now and then. It’s challenging flying but plenty of fun,” said Vegh.

On his Instagram, Vegh describes himself as a “Minarchist Libertarian” and a “aviator/industrial designer/creative/free thinker experiencing The Great Simulation.”

The plane, a 1968 Cessna 150H, was registered in the Federal Aviation Administration (FAA) database to Aviato Research LLC, a Phoenix-based company; established in June, per the Arizona Corporation Commission (ACC).

This wasn’t Vegh’s first right-leaning artistic feat. Last January, Vegh completed a flight that drew the profile of then-President Donald Trump. That flight path appeared to fly under the radar of the news and right-wing personalities, however.

The phrase “F**k Joe Biden” became popularized around mid-August to early September. Crowds began chanting the phrase at college and professional sporting events, and eventually other events as the phrase gained more traction. In early October, the phrase was translated to “Let’s Go Brandon” after a reporter mistakenly told a NASCAR driver named Brandon that the crowd, chanting the explicit phrase, was saying “Let’s Go Brandon.”