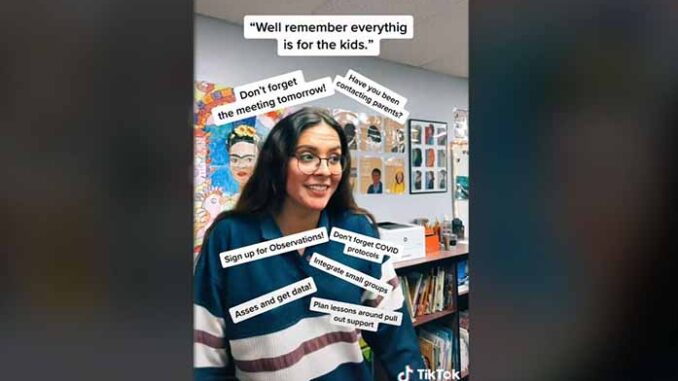 The Arizona Secretary of State’s office nominated a Phoenix elementary school teacher, Amanda Delphy, for the national John Lewis Youth Leadership Award, due to her classroom activism. Delphy started a “diversity club” at her school and openly teaches her second grade students social-emotional learning (SEL), activism, and “authentic history” primarily focused on black, indigenous, and people of color (BIPOC). SEL is a framework for interpreting and processing subjects – especially complex ones like history or sexuality – through tools like literature, writing, and art to develop certain social and emotional skills. Oftentimes, SEL serves as a vehicle for propagating tenets of controversial concepts like Critical Race Theory (CRT) and social justice. Ultimately, Delphy didn’t win the award – conservative activist C.J. Pearson did last week.

“Amanda Delphy is a second-grade teacher in the West Valley, where she has focused on empowerment through social-emotional practices, conversations about activism, and authentic history lessons that represent BIPOC individuals as powerful,” read the secretary of state’s nomination.

Delphy regularly posts TikTok videos on how she educates her students to understand certain progressive concepts. Most recently, Delphy described how she teaches her second graders about SEL and equity, how Halloween isn’t “culturally responsive” and that the slang term “savage” – used by kids to describe something or someone considered cool for being bold and unbothered by any consequences – is actually offensive to indigenous people. She’s gained over 14,600 followers for her content.

Delphy teaches second grade at Holiday Park School in the Cartwright School District (CSD). The elementary school’s diversity club launched this semester under Delphy’s suggestion; she announced she will lead the club, and has referred to it jokingly as “indoctrination.” Both the school and the district emphasize that SEL is of equal importance to academics.

Delphy claimed in a September video that equity and SEL education in the classroom were necessary to build “future leaders.” Just the day before posting that video, Delphy posted another video lamenting that her students were “very far below grade level.” She explained that her school received a new math curriculum that she liked, but her team was having trouble implementing it due to the students’ capabilities. As a result, Delphy described how she became “extremely escalated,” “frustrated,” and “overstimulated” from trying to teach math to her students. She said that ended the lesson by sharing those feelings with them.

“I just can’t stress enough to always be vulnerable with your kids when you feel like it’s the right time to do so. I didn’t have to tell my kids how I was feeling. I really didn’t,” said Delphy. “But I wanted to because I wanted them to understand that feelings happen and sometimes negative feelings happen too, and even to people like me, who’s a teacher, right?”

SEL and equity are related to Delphy’s teaching moments on how both Halloween and a favorite slang term for kids, “savage,” are problematic.

In a video posted Tuesday, Delphy explained that she told her students she didn’t decorate for Halloween because she didn’t want those who didn’t celebrate Halloween to “feel unsafe or not welcomed.” She also explained that celebrating Día de Los Muertos (Day of the Dead) could result in “cultural appropriation” that would be disrespectful to Hispanics, but said she couldn’t explain what is or isn’t culturally responsive because she “doesn’t identify as Hispanic, Latino, or Chicano.” This video was a follow-up to a similar one at the end of last month, posted as a “reminder” after she’d seen people decorating for Halloween.

In another video posted earlier this month, Delphy complained that one of her second-grade students called cartoon puppies in a video “savage,” inspiring the entire class to do so as well. She explained how she told her students that they were in a “safe space” and therefore they needed to have “honest conversations” about why they couldn’t say the word “savage” in their “safe space.”

“For those of you who don’t know, I’m half Native American and I actually hate that word. [T]here was a huge mass-murdering of Native and indigenous people, hence the population and culture dying the way that it has, and one of the words that were used to label Natives and indigenous people was ‘savages.’ I understand it’s a cool term now, whatever, but no not over here. Don’t bring that negativity over here,” said Delphy. “I let them know where the word ‘savages’ came from and why it hurts me as a Native person. And I told them that my goal is to create a safe space for everyone, and I just wanted to be honest with them and ask them if they could just not use that word in our safe space.”

Delphy added that this wasn’t her pushing an agenda pertaining to social justice or modern liberalism.

“This didn’t push a ‘social justice, liberal agenda,’ as many of you people call it. This was just me being honest about something that was traumatic to my ancestors and people before me and my people now, and my people in the future,” said Delphy. “Don’t be afraid to have those conversations with your students. My kids are eight years old, and they can understand it!”

Delphy also sells educational resources through “Teachers Pay Teachers,” a collective of supplementary curriculum created and sold by teachers to other educators. One of Delphy’s resources summarizes the origins of Thanksgiving, which she claimed was established as a celebration to thank Native Americans for their kindness to the early settlers. In reality, Thanksgiving had to do with a longstanding tradition expressing gratitude to God – Native Americans just happened to be there for one hosted by the early Plymouth colonists.

“What is Thanksgiving?” read the resource. “It is a Holiday that is the fourth Thursday of every November. It has also been told that the Pilgrims came across a tribe of Native people who taught the pilgrims how to hunt and gather so that they could survive. The story continues that Thanksgiving is meant to represent the large celebration that the Pilgrims held for the Natives to say ‘thank you’.”

In history predating the colonial settlements and long after, thanksgivings were regular celebrations thanking God for His blessings such as a good harvest, health, or military victories; in 1798, the Continental Congress proclaimed a national thanksgiving for the Constitution’s enactment. Thanksgiving Day as known to modern America was first called for by the “Mother of Thanksgiving:” a famed women’s rights activist and “Mary Had a Little Lamb” poet, Sarah Josepha Hale, to unite the nation and ease tensions between the North and South – she had the idea from the annual thanksgivings that her family celebrated. President Abraham Lincoln heeded Hale’s call in 1863 as the Civil War raged on – his proclamation called for a “Day of Thanksgiving and Prayer” to occur the last Thursday of November, with no mention of the Native Americans.

Delphy’s presentation characterized the settlers as callous, selfish people who took advantage of Native Americans. The resource also taught that wearing any traditional Native American items, like headdresses, was disrespectful. Delphy has displayed her prioritization of Native Americans over other races to her students. Last week, she wore a shirt that read “The Future Is Indigenous.”